Potentially one of the biggest transfer deals of this summer, Zlatan Ibrahimovic's contract is soon up and clubs around the world are lining up to sign him. What Are The Odds checks out the big movers and who leads the chase and why. 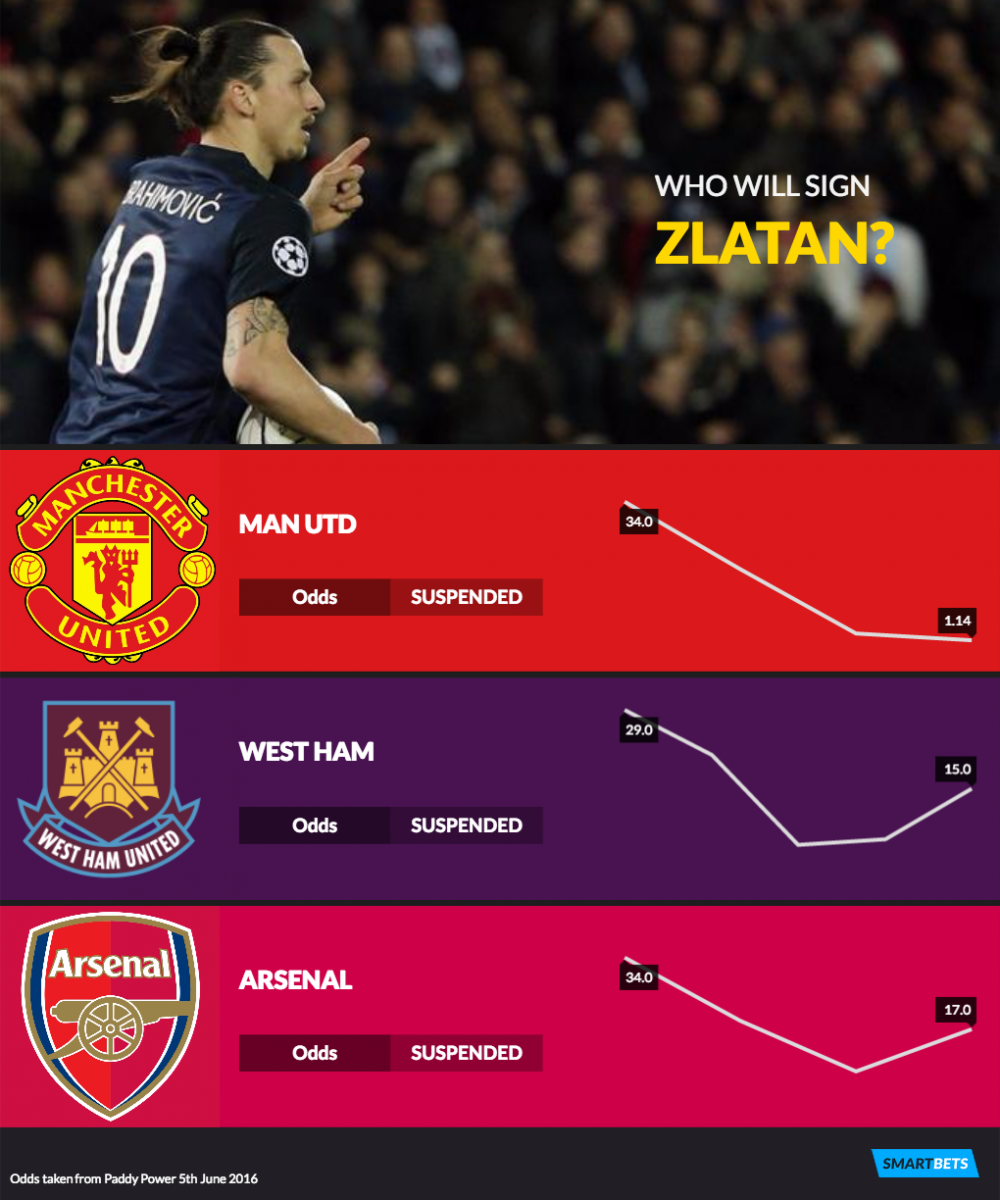 The Swede is a free-agent after leaving on a high at Paris St-Germain, with clubs around the globe being linked with his signature. Talks of a move to the MLS and the now mega-rich Chinese Super League are inevitable, but it's believed that Zlatan, now 34, would prefer to stay for at least one more year at a ‘top’ European club and potentially win major honours.

The Premier League looks the most likely destination, with Manchester United apparently the only ‘player in town’.

Odds on Zlatan moving to Old Trafford had been floundering prior to the sacking of Louis Van Gaal at United. Bookmakers such as Sky Bet in the final months of Van Gaal’s contract had him price as high as 3/1 (4.00) to head to Old Trafford.

The appointment of Jose Mourinho has changed all that, and with an announcement expected, all bookmakers have suspended betting on him playing under Mourinho in the upcoming season.

Paddy Power were one of the last bookmakers standing, offering incredibly short odds of 7/50 (1.14) on the move, this has subsequently been suspended with the announcement of his next club coming on Tuesday, according to a claim by Zlatan himself.

Prior to the latest movement, MLS side LA Galaxy where the next best fancied club, with odds of 4/1 (5.00) on him heading to the States.

At one point in time West Ham United had been firmly in the race to sign the enigmatic Swede, with Sky Bet bookmakers once backing the move with a price of 4/1 (5.00), joining the likes of Andy Carroll and Dimitri Payet. That has all changed now, and their case wasn’t helped by failing to clinch Champions League football. With the last recorded odds of 14/1 (15.0) representing a fruitless bet.

The Gunners are a club that Zlatan is believed to be an admirer of, and a move to North London with Champions League football in the bag might once have been ‘the deal clincher’. Arsenal seemingly never showed a willingness to sign Zlatan, despite early attractive odds, the Gunners were, as such, always behind West Ham, with the last quoted odds of 16/1 (17.0) last week.