Stoke City’s ever-expanding reach in the transfer market could reach new heights this summer as the Potters are amongst the leaders of a parade of European outfits linked with Fenerbahce striker Robin van Persie, per Sky Bet.

Clubs across the continent have been associated with the Dutchman, and What Are The Odds has the lowdown on where the former Arsenal and Manchester United ace could land. 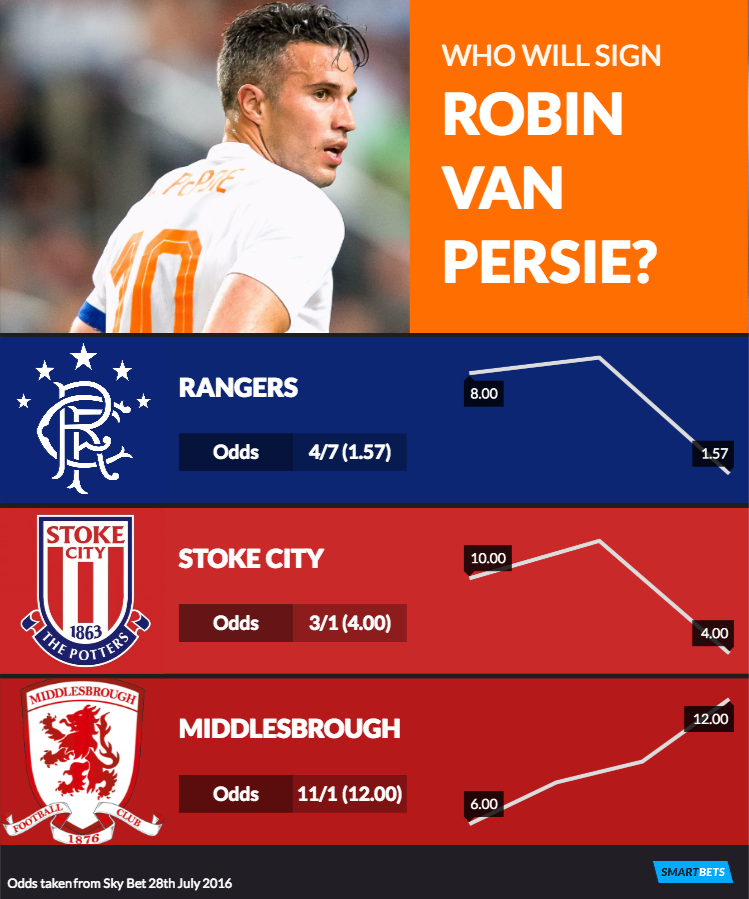 Manager Mark Hughes’ side have already recruited Liverpool midfielder Joe Allen for £13 million, and Stoke are now 3/1 (4.00) to wrap up a deal for Van Persie. The main obstacle, however, is that Fener are understood to have little interest in selling, and the veteran forward is at identical odds to remain with the Turkish giants past September 3rd.

Peter Odemwingie has already left Stoke this summer, and Peter Crouch, 35, is entering the final year of his deal with the Potters, meaning another seasoned presence wouldn’t go astray.

The same issue stands for Scottish powerhouse Rangers who yesterday were priced at 8/1 (9.00), today though they are firm favourites with a significant price fall to 4/7 (1.57). Despite their return to the top tier, surely couldn’t convince Van Persie to join their cause, never mind finance his salary demands. It seems however, that bookmakers know something we don't and if RVP does show up at Ibrox it would surely be a major coup for the Glasgow giants.

But interest in RVP stretches far and wide, with top-flight new boys Middlesbrough priced at 11/1 (12.0) to bring him in, although that could be difficult considering the northeast club just signed Alvaro Negredo on a season-long loan complete with £100,000-a-week wages.

Van Persie moved to Arsenal from Feyenoord in 2004, and the Everton links could get particularly interesting if compatriot Koeman ends up cashing in on in-demand striker Romelu Lukaku.

A raft of continental big guns are also in hot pursuit, with Paris Saint-Germain listed at 14/1 (15.0) to sign Van Persie after losing Zlatan Ibrahimovic this summer, while Barcelona and Real Madrid look like much less likely destinations at 22/1 (23.0) and 33/1 (34.0), respectively.

Amid all those new options, the 32-year-old could ultimately end up retracing his steps to the Emirates Stadium, and Arsene Wenger is currently a 33/1 (34.00) long shot to welcome his former talisman back to north London with open arms.