Almost four years after winning Cage Warriors’ lightweight crown to become a two-weight champion in the European promotion, Conor McGregor is on the verge of achieving the same task in the Ultimate Fighting Championship.

Just days separate The Notorious from his lightweight championship bout against title-holder Eddie Alvarez, and What Are The Odds provides the latest markets available on UFC 205, the first UFC card to be held in New York City, courtesy of William Hill.

Madison Square Garden will play host to the biggest card in UFC history this Saturday, and McGregor is set to head in as 8/13 (1.62) favourite to steal the title from Alvarez, who also remains around the same odds he's been priced at since the offset, currently 13/10 (2.30).

In truth, 155 pounds is perhaps the weight McGregor should have been fighting at throughout his UFC career, but he’s instead carved the same path he did through Cage Warriors before finding his more natural division.

Alvarez therefore threatens to be the greatest task of the Irishman’s career, although a five-inch reach advantage stands to do him the world of good when both fighters start swinging.

By all means, this one doesn’t look likely to go the distance. McGregor’s furious striking combined with Alvarez’s similarly vicious punches and accomplished wrestling to boot means it’s plausible this one could end early on.

McGregor is listed at 11/10 (2.10) to win by KO, TKO or disqualification with William Hill, but the odds don’t favour Alvarez in that same market, with The Silent Assassin 9/2 (5.50) to win by the same means. The Philadelphia native is at better odds to win by submission of decision, however, with both valued at 4/1 (5.00).

Alternatively, punters could listen to “Mystic Mac’s” own predictions and back a first-round knockout victory for the Dubliner, currently priced at 12/5 (3.40), while a win for Alvarez in the opening five minutes is at longer odds of 6/1 (7.00). 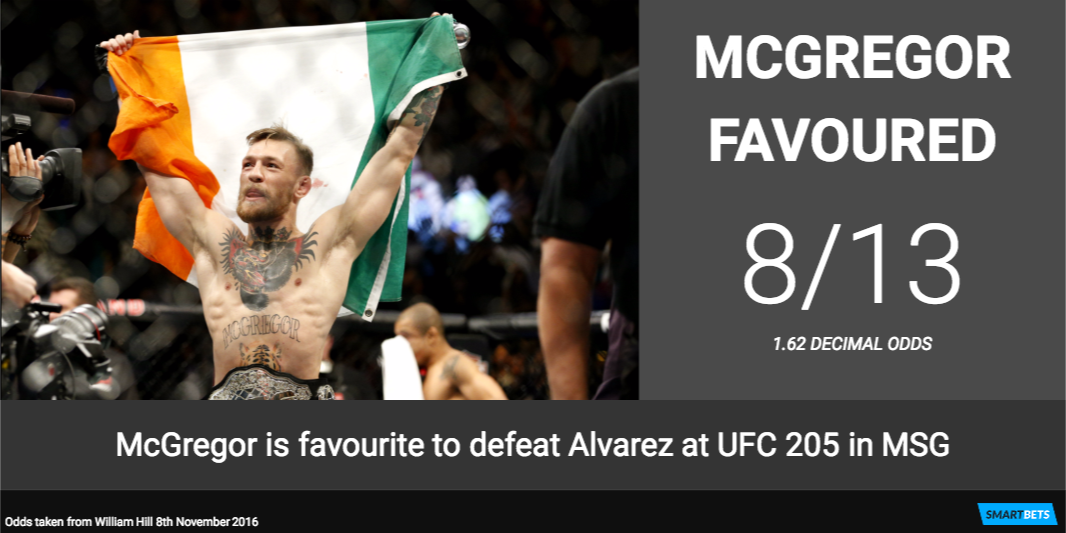 He may be the reigning champion, but Woodley enters his bout with Thompson as 8/5 (2.60) underdog, while his opponent is a much more favourable 1/2 (1.50). Those odds mean Woodley’s chances of a successful opening title defence have slipped further in recent weeks, while “Wonderboy” Thompson comes to Madison Square Garden on the back of a seven-fight win streak, four of which came about via knockout.

Jedrzejczyk is the only reigning champion who will be favourite for her title match, with UFC 205 odds, priced at 1/4 (1.25) to emerge from the New York bout with the belt still around her waist, leaving Kowalkiewicz in her dust as an 3/1 (4.00) underdog.