There, the man formerly known as Phillip Brooks will make his mixed martial arts bow against Gall, and What Are The Odds has analysed which betting markets look most enticing.

With mere days left until Punk makes his way into the octagon, the former wrestling bad boy is 9/4 (3.25) to come away with the victory this Saturday, per Paddy Power, while Gall stands as a much more favourable 1/3 (1.33).

While those odds certainly appear stacked against Punk, it is worth noting those odds are at least more hopeful than the 13/5 (3.60) odds he could be found at this time a fortnight ago.

Gall may only be 24 years of age, but having grown up more intensely with a mixed-martial arts background, he’s clearly the favourite to make sure Punk has a bad time of things in his UFC debut.

Will the former WWE icon’s first steps in the UFC be followed by victory, or will CM Punk’s MMA dream come crashing down before it’s hardly begun? 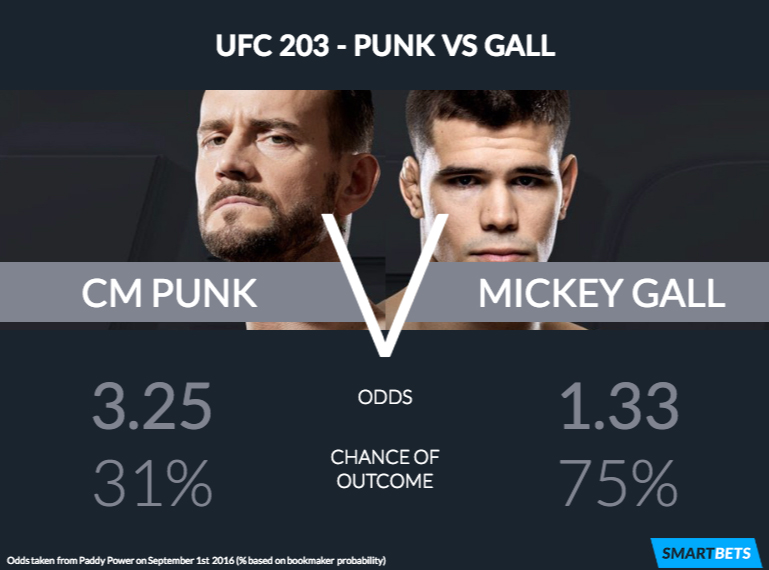 Back CM Punk post-WWE to win at Paddy Power

Of course Punk and Gall are only responsible for a portion of the UFC 203 spotlight, as Stipe Miocic will defend his UFC heavyweight title against Alistair Overeem at the Quicken Loans Arena.

The odds haven’t slipped in recent weeks for the championship bout, with Miocic still a 8/11 (1.73) leader to come out with belt intact, and Dutch bruiser Overeem remains an outside pick at 11/10 (2.10).

That being said, the margins are awfully slim, and both fighters come into this contest with some substantial hot streaks behind them and a list of superstar names on each of their victims lists.