After a slight wobble with the bookmakers, UFC featherweight champion Conor McGregor is the favourite to attain revenge against Nate Diaz at UFC 202 next month.

The Notorious suffered his first defeat in almost six years at UFC 196 in March, but he’ll have his chance at vengeance among a stacked UFC 202 card, and What Are The Odds has broken down all the biggest betting markets available for the Las Vegas showcase. 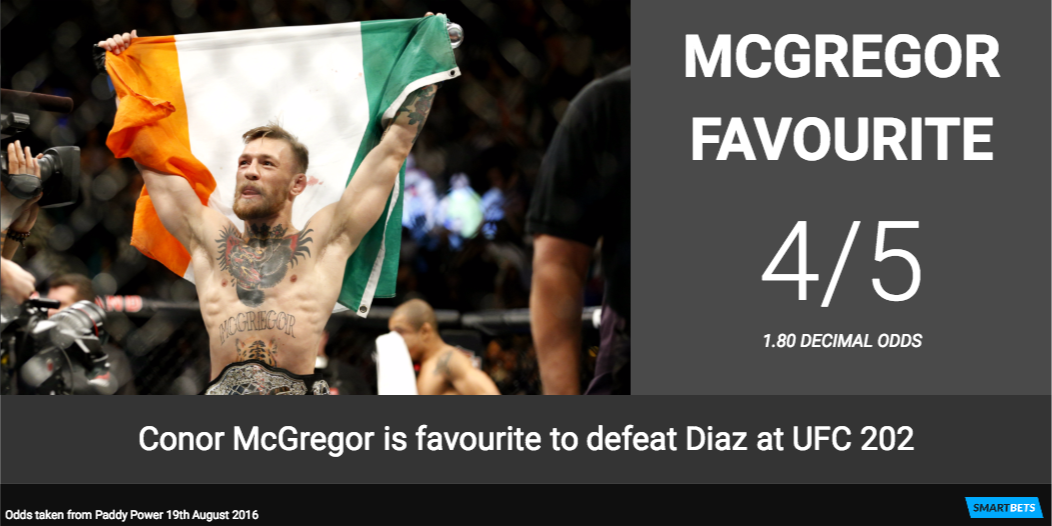 McGregor vs. Diaz 2 was originally pencilled in to take place at UFC 200, but a short-lived retirement from the Irishman meant the rematch was delayed, much to the chagrin of some.

Nevertheless, the second showdown is now slated for Saturday August 21nd 2016, and McGregor is a 4/6 (1.80) favourite with Paddy Power, while Diaz takes his spot as underdog at evens (2.00).

It’s a surprising balance considering Diaz’s second-round rear-naked choke in their first meeting led to a convincing finish, and many will feel the Stockton native is well worth backing to go 2-0 against McGregor.

Alternatively, McGregor could capitalise more on his strengths this time around. If he keeps Diaz at striking distance and manages to unleash his kicks, he has a chance of finishing the bout early. He’s listed at 7/1 (8.00) to score a knockout win in the second round, 9/1 (10.00) to KO Diaz in the third and 22/1 (23.00) to snatch victory via KO in the fifth and final round.

Get £30 free bet when you sign up at Paddy Power