It was only a matter of time, after the sensational performance in the Champions League against Manchester City, Monaco’s Tiemoue Bakayoko is a wanted man. What Are The Odds looks at the possibilities of who may look to sign the 22-year Frenchman this summer.

Multiple reports including from Bleacher Report are suggesting that Tiemoue Bakayoko has been scouted on a number of occasions by Manchester United, with Jose Mourinho seemingly keen to spend big again this summer and further bolster United’s big for a league title and more silverware. Ladbrokes make the Red Devils the favourites to clinch his signature this summer too, with odds of 7/4 (2.75) currently on-offer.

It’s all about the big guns of Europe, with Real Madrid next in the market with odds of 4/1 (5.00). The Spanish giants would be another alluring option for Bakayoko with fellow Frenchman Zinedine Zidane a likely influence on whether or not the Monaco star will opt for La Liga over the Premier League.

Interestingly it’s Madrid’s biggest rivals who a little further back in the betting with odds of 9/2 (5.50), no doubt that the Catalan side are in need of a fresh injection of youth and star power in their midfield, with Iniesta reaching the twilight of his career.

However, could it be the team that Tiemoue Bakayoko’s Monaco knocked out of the Champions League that makes the most serious offer of them all? Manchester City are backed at 6/1 (7.00) and what is guaranteed it would seem is first team football at the Etihad next season with rumours a mass clearout and a continuous rebuild job to fit Pep Guardiola’s vision. Money certainly wouldn’t be an issue, so it could very well be a choice between tradition or project this summer for the young midfielder. 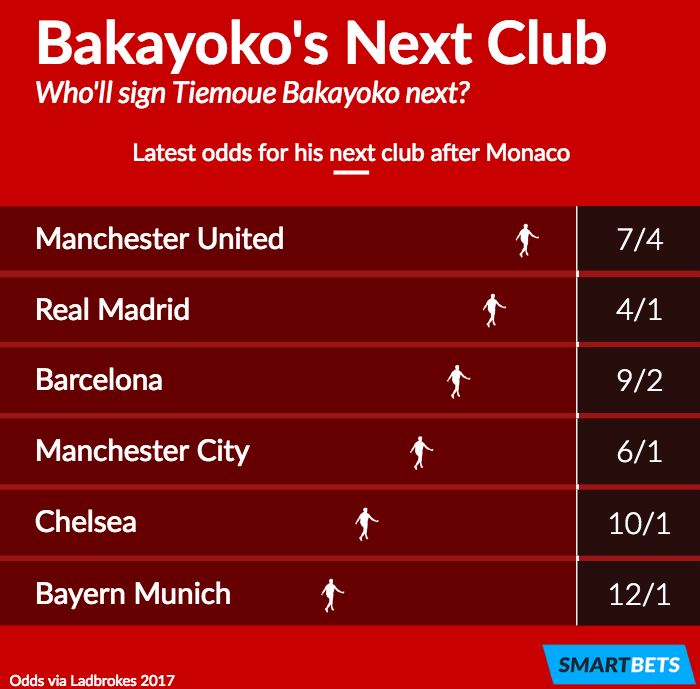 Chelsea at 10/1 (11.0) may not have the pulling power they had a few seasons back, but with the West London club very much on-course to lift the Premier League title and another exciting season under Antonio Conte ahead it could be that Bakayoko fancies linking up with fellow Frenchman, and arguably the best midfielder in Europe this season, N'Golo Kanté in midfield.

Probability of Tiemoue Bakayoko's next club