Many a Liverpool youngster in this generation will have dreamed of having Steven Gerrard as a tutor at the club, and their wish may now be granted as the Reds icon is tipped for a return to the academy in a coaching capacity.

Sky Bet has the Merseyside legend priced at 1/8 (1.13) to take up any position with the academy, under-18s or under-23 teams, but a myriad of other options lay ahead, too, and What Are The Odds has looked at just where Gerrard’s next career move may take him.

Having spent a total of more than 25 years at Anfield, joining the club at the age of nine before departing for L.A. Galaxy in 2015, a return to his point of origin would be almost poetic for Gerrard. It also seems highly likely the former midfielder would be welcomed with open arms, and first-team manager Jurgen Klopp has said the “door is always open” for him, per Sky Sports.

After that, punters can play the numbers game and back a total of 48 teams in one single bet should they desire, with Gerrard priced at 6/1 (7.00) to join any side from League One or League Two. That being said, after rejecting an approach from MK Dons earlier in November, that may not be the route into management he’s seeking.

In fact, a senior role may not be what Gerrard’s after at all, and thus the England under-21s job could be more suited to him, especially if former Three Lions team-mate Gareth Southgate gets the nod as first-team coach.

Gerrard is listed at 16/1 (17.00) to take the under-21 job, but if you think that’s unlikely, he’s also a down at 20/1 (21.00) to take the Liverpool first-team position as his own. Given the Reds are challenging for top spot in the Premier League and look dazzling under Klopp, that market appears a closed case, however.

His old club aren’t the only Premier League outfit in the market, either, with Swansea and Hull City listed at respective odds of 20/1 (21.00) and 22/1 (23.00) to hire the ex-top-flight hero, having each endured tough patches under Bob Bradley and Mike Phelan of late.

Looking abroad, Gerrard is 25/1 (26.00) to follow Gary Neville’s path to Spain and take charge of a team in La Liga, while the same odds are also being offered on any Serie A club or any team in the Chinese Super League. Granted, the 36-year-old could earn his weight in gold with a move to the Far East, but after returning home from LA this month, those chances seem all but impossible.

A host of Championship clubs are also in the running at 33/1 (34.00), including Aston Villa, Newcastle United, Derby County, Leeds United, Nottingham Forest and Sheffield Wednesday, but a return to Anfield appears imminent. 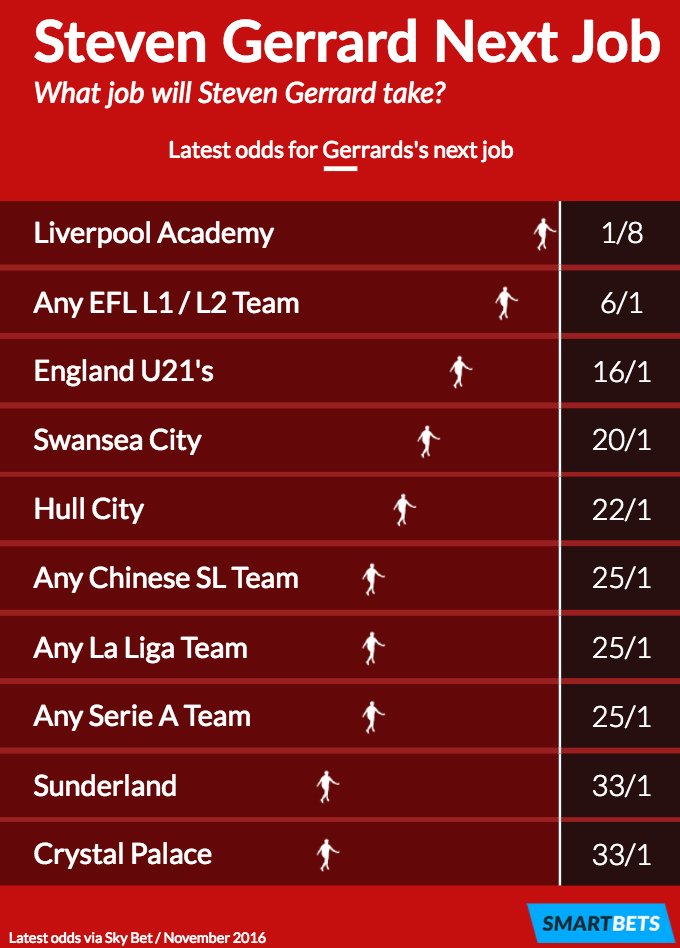