Steven Fletcher is a free agent waiting to be snapped up by a club after his release from Sunderland at the end of the season. After going out on-loan at Marseille at the end of last season he has returned to England but must now find a new club before the season gets back underway. What Are The Odds looks at who are the favourites via Sky Bet bookmaker transfer odds. 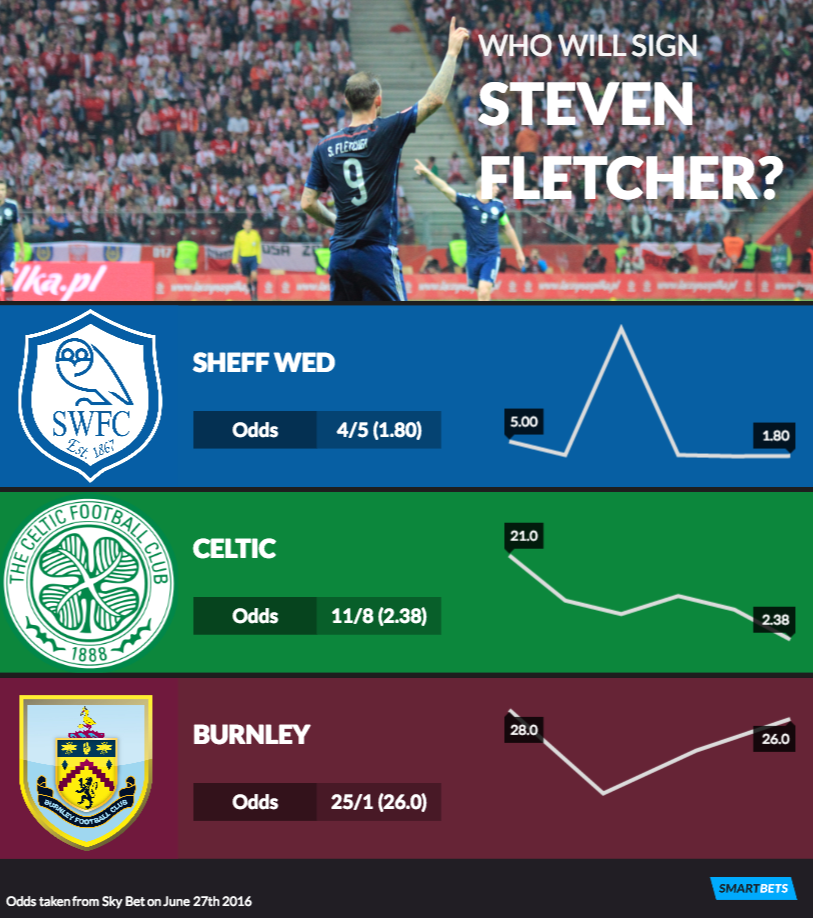 Recent reports are linking Fletcher with a move to Greece with AEK Athens, but it would seem that the player is holding out for a move to a top level Championship or Scottish Premier League club, with a host of clubs interested in his signature.

Current favourites are Sheffield Wednesday who just missed out on promotion to the Premier League, losing 1-0 to Hull in the play-off final, and you can currently get odds of 4/5 (1.80) on the Owls securing a deal for the 28 capped, 29-year old striker.

Celtic were the club most strongly linked to signing Fletcher, with Brendan Rodgers currently rebuilding his Celtic side for the new season it would appear that a striker is a top priority and a Scottish international in Glasgow could tick the box. However, it was reported that he had the chance to sign in the past but turned it down, leading to some fans not exactly warming to the idea of the striker now 'reluctantly' having to sign with them. Odds of 11/8 (2.38) suggest it's a strong possibility though and there's little doubt that he would score at that level.

Staying in Scotland, and Hibernian who have just appointed Neil Lennon as manager are also in the mix, albeit as outsiders, but they are possibly looking to attract back their former striker to Easter Road. During his time in Edinburgh Fletcher scored 43 times in just over 150 appearances, before moving on to Burnley. Odds of 8/1 (9.00) suggest it's nothing more than a wild bet, but if the right package is presented to Fletcher then who knows.

Making a nice segue into Burnley, they are also in the mix and again another former club of Fletcher's. During his short spell at Turf Moor he scored eight times in over 30 appearances for The Clarets, but maybe this is where your money is best left in your wallet. Odds of 25/1 (26.0) suggest that a return to the Premier League is not on the cards right now.