Transfer window deadline day is already upon us, and despite all signals the Frenchman was destined for the St. James’ Park exit, Moussa Sissoko remains a Newcastle United player.

That being said, it seems only too plausible the star could make a last-minute move away from the Championship outfit on Wednesday, and What Are The Odds has analysed the latest markets available at Sky Bet, with Spurs the new shock favourites for his signature.

North London rivals Tottenham Hotspur have in fact made a surprise surge in the market and are now listed at just 5/4 (2.25) to bring Sissoko to England’s capital, a stark improvement considering they were way out at 20/1 (21.00) not long ago.

After heavy links with Arsenal earlier this summer, Everton are listed as 8/1 (9.00) favourites to bring the midfielder to Goodison Park, a drop from the 33/100 (4.33) odds he could be found at just yesterday.

Crystal Palace are another outfit looking to tempt the Frenchman back to the Premier League, although manager Alan Pardew has seen his side fall from 3/1 (4.00) in the running to more distant second-favourites at 7/1 (8.00) with less than 24 hours remaining in the transfer window.

Yohan Cabaye is already at Selhurst Park and might relish the thought of linking up with his France team-mate in south London, but Palace’s spending limits might have already been stretched by the big-money signing of Christian Benteke.

Juventus could be an interesting foreign option at 8/1 (9.00), however. With Paul Pogba now back at Manchester United, it’s feasible Juve could make a move to recruit the playmaker. That’s despite  the Turin giants already bringing Miralem Panic in from Roma this summer, and one would think funds may not be a concern following Pogba’s £89 million switch.

Real Madrid and Paris Saint-Germain, each of whom have the kind of financial backing needed to sanction a move of such magnitude, can both be found at 14/1 (15.00) in the hunt for Sissoko, but both teams may need to shift players before they can invest in more new faces.

The same could go for Borussia Dortmund and West Ham United, each of whom look like unlikely options at 33/1 (34.00), although deadline day has a habit of turning up its share of last-chance surprises. 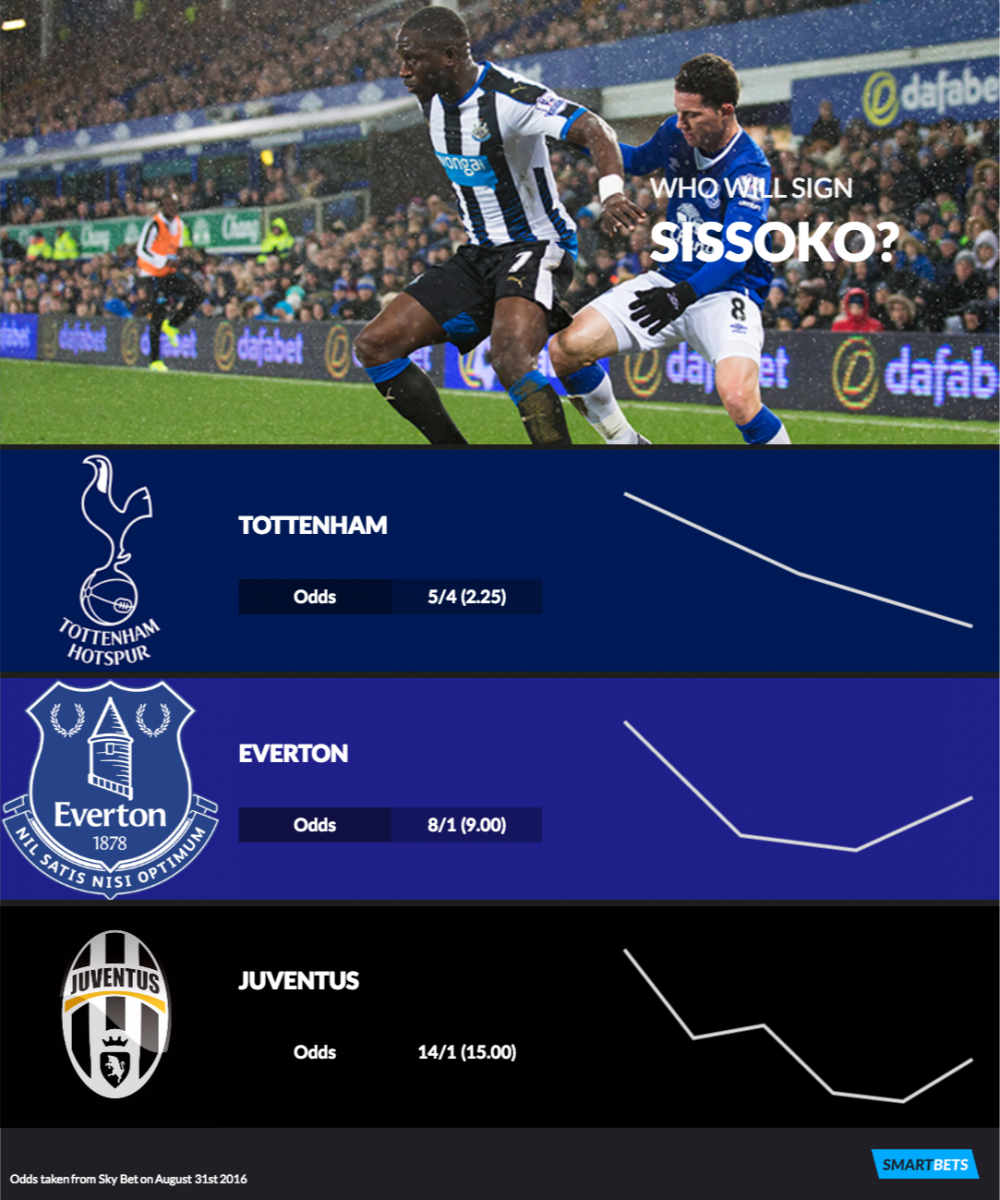