Brentford’s finest looks set for a Premier League promotion this month as rumours suggest Scott Hogan is set for a top-flight move, and West Ham United are runaway favourites to land his services.

BetVictor provide odds on 14 clubs both foreign and domestic supposedly vying for the striker’s signature, and What Are The Odds has the latest on exactly where he looks likely to end up come February.

The Hammers appear close to nailing their target as far as the odds go, considering Slaven Bilic’s side is currently 8/11 (1.73) to sign Hogan, who has less than six months remaining on his contract at Griffin Park.

Andre Ayew is away at the 2017 Africa Cup of Nations, Diafra Sakho is a while from returning to fitness, Juventus loanee Simone Zaza has struggled to acclimate in England and Andy Carroll’s fitness can't be relied upon, leading West Ham to search for forward reinforcements.

However, the race isn’t yet over, and the Guardian reported on Tuesday that Watford, currently listed at 3/1 (4.00) to sign the forward this month, have offered £8 million for the 24-year-old. Brentford may well smack their lips at the figure with the prospect of Hogan leaving for free in June, and a move to Vicarage Road would make sense given Odion Ighalo has struggled this term.

The one international outfit in the market for Hogan is RB Leipzig at 5/1 (6.00), and the idea of joining a team currently second in Germany’s top flight may appeal to the player, particularly after former Nottingham Forest star Oliver Burke joined the German upstarts last summer. 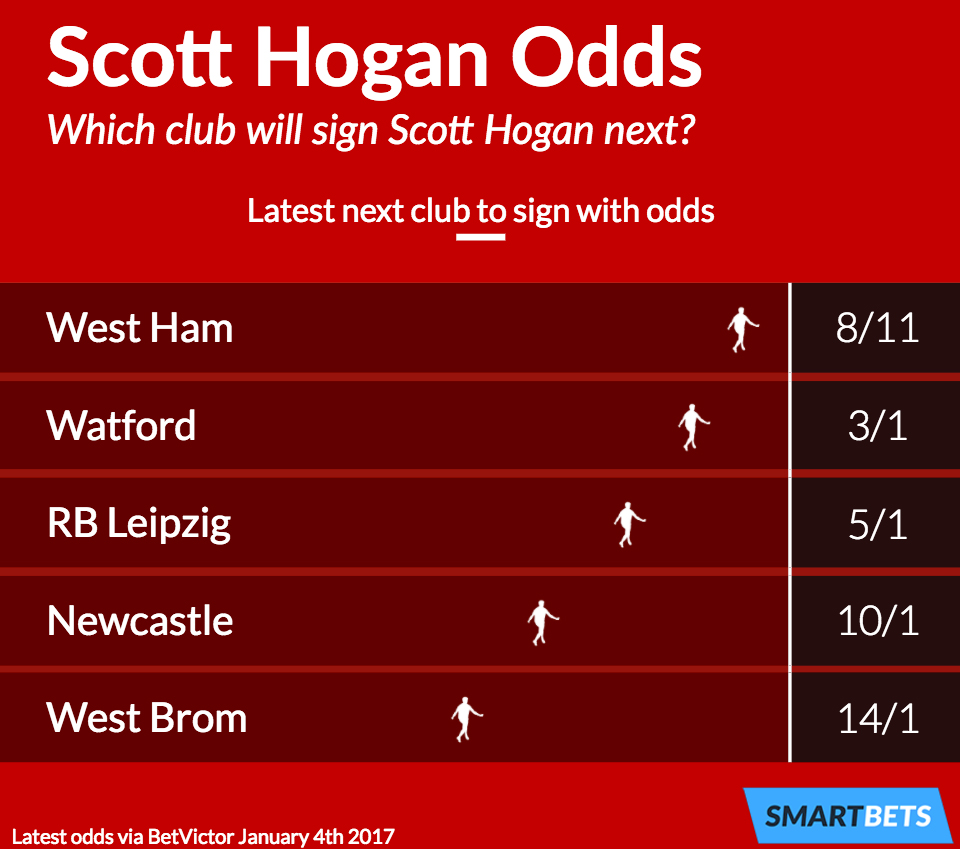 It’s a sharp fall in the stakes from there as Newcastle United, Reading, Derby County and Hull City follow in as 10/1 (11.00) outsiders, although the idea of joining another Championship club may seem like something of a sideways step.

Top-flight West Bromwich Albion could be a more enticing project at 14/1 (15.00), although that move may only materialise if Saido Berahino were to leave the Hawthorns, while second-tier trio Fulham, Sheffield Wednesday and Bristol City follow up at longer odds of 20/1 (21.00).

Probability of Scott Hogan's next club