After playing in just a couple of cameo appearances for Manchester United manager Jose Mourinho this season, a winter exit is looming for Bastian Schweinsteiger, and the powerhouses of the United States look to be favourites to land his signature.

BetVictor are offering evens (2.00) on any MLS club signing Schweinsteiger before February 3rd, but What Are The Odds predicts a lengthier race for the German’s signature, with a heady raft of 14 clubs linked.

LA Galaxy in particular may be in the hunt to sign Schweinsteiger after seeing Designated Players Steven Gerrard and Robbie Keane depart the club, while Nigel de Jong is also no longer patrolling the west coast club’s midfield.

Although America may look the most likely destination as things stand, Schweinsteiger is also priced at 6/1 (7.00) to join any Chinese club during the January transfer window, while the Australian equivalent sits just behind at 8/1 (9.00). The A-League is easily the least likely of those destinations given they boast significantly less spending power, however.

France also looks a plausible next playing location, however, as Ligue 1 giants Marseille and Paris Saint-Germain follow in at odds of 12/1 (13.00), with big-spending AS Monaco and Lyon not far behind their compatriots at 16/1 (17.00). Of that quartet, however, only PSG and Monaco may be able to meet Schweinsteiger’s wage demands, which are sure to be a key factor in whether he moves at all. 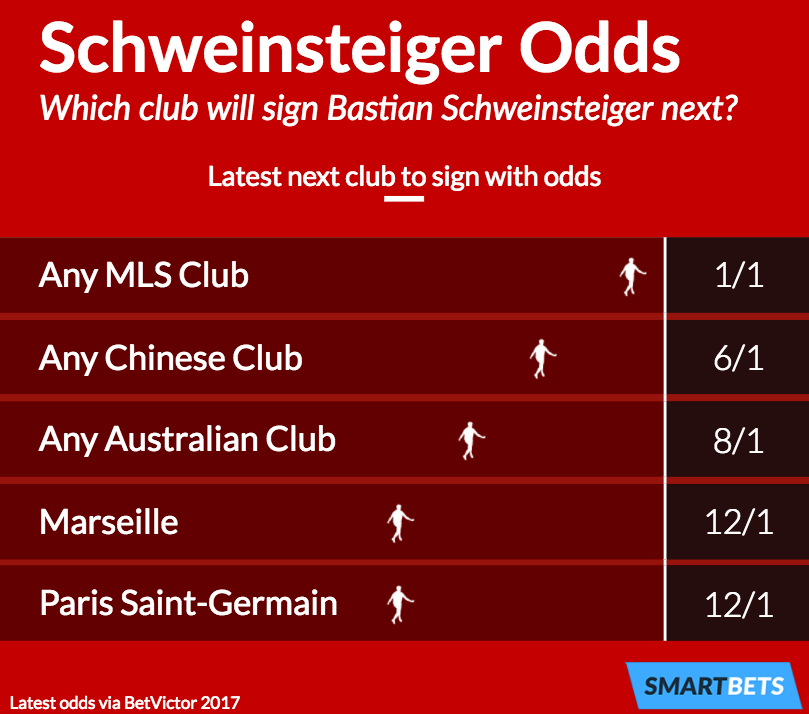 It goes without saying that a return to his native Germany stands to be the most logical manoeuvre, although the interest doesn’t appear to be there as far as the bookmakers can see.

Borussia Dortmund, Schalke 04 and Wolfsburg are each listed at 25/1 (26.00) to land the midfielder this winter, although Schweinsteiger may not be so open to the idea of pulling on another Bundesliga outfit’s colours considering he spent a hugely successful 17 years with Bayern Munich.

An Italian quartet complete the market as Napoli and Roma, as well as rivals AC Milan and Inter Milan also come in at 25/1 (26.00) to recruit retired Germany international Schweinsteiger, but again, financing his salary in the more cost-effective Serie A may be a struggle.

Probability of Bastian Schweinsteiger's next club