Ryan Sessegnon is a man wanted by a host of clubs, and was heavily linked to a move away from Fulham last summer. The 16-year old is considered one of the hottest prospects in English football so what are the odds of him making a big money transfer in the coming months?

Liverpool are the clubs making all the noises for the teenager who made 29 appearances this season for Fulham, scoring seven goals and assisting four, and odds of 13/5 (3.60) suggests they are not that close to making the move happen, but the price is good enough to suggest it’s very likely (and profitable too). A recent report in the Express suggests that Klopp’s Liverpool are willing to pay a likely £15 million fee for the youngster, however that fee may be significantly higher should the Cottagers achieve promotion to the Premier League this season.

Everton are at this time, according to Paddy Power, Liverpool’s main challengers to sign Ryan Sessegnon with odds of 4/1 (5.00) on-offer. A move to the Toffees might be appealing with the proven opportunity and success rate of other young talents at Goodison Park - Tom Davies and Ademola Lookman trailing a blaze for other prospects wanting regular Premier League game time.

Another club that had great success with a youngster moving from Fulham are Celtic, who signed Moussa Dembele last summer, and has now built up a big enough profile playing for the Hoops that a move to European giant beckons. Ryan Sessegnon might just see Celtic as the club that can provide short term gain, whilst playing Champions League football for a season - odds of 11/2 (6.50) suggest it’s not that likely considering other potential, bigger suitors in the mix.

Tottenham, Southampton and Newcastle are all valued at 11/1 (12.0) and all would represent good options for the youngster. Spurs would likely be the most attractive option with Champions League football and another potential title challenging season ahead. Southampton would offer a platform where youth is encouraged, but would it represent a huge step up if Fulham are promoted? Newcastle are likely to be highly-ambitious next season and the appeal of playing in front of 52,000+ fans could be significant. 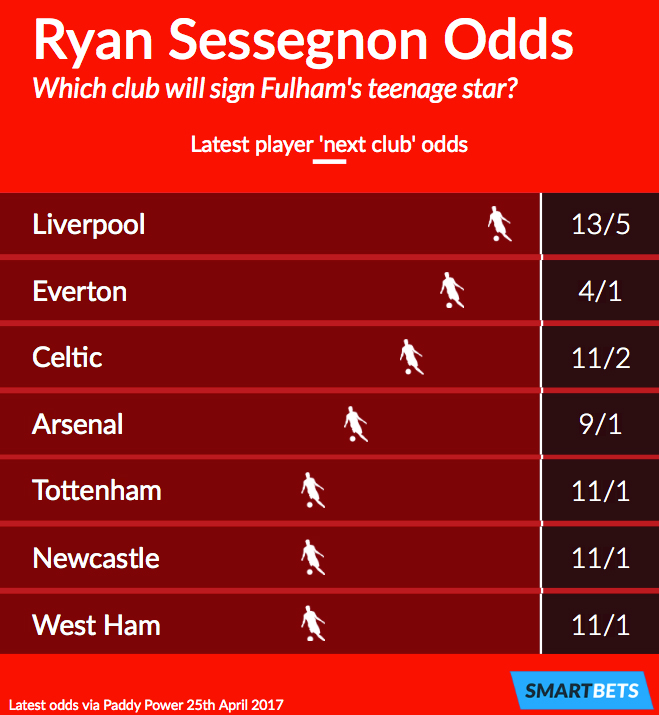 Man City and Man Utd are head-to-head at 14/1 (15.0) and look like good bets, especially Guardiola’s side who will be looking for pace and an injection of quality next season. United on the other hand may be looking for a replacement for Luke Shaw who isn’t considered a Mourinho favourite, and Sessegnon despite being so young, could fit the bill.

Probability of Ryan Sessegnon's next club