One of the surprise storylines of this summer’s transfer window is reaching boiling point as Hull City have taken a firm lead in their efforts to recruit free agent Hal Robson-Kanu.

The 27-year-old has been in demand since dazzling for Wales at Euro 2016 last month, and What Are The Odds has crunched the numbers to see which outfits are in the frame to land his loyalties, according to Sky Bet. 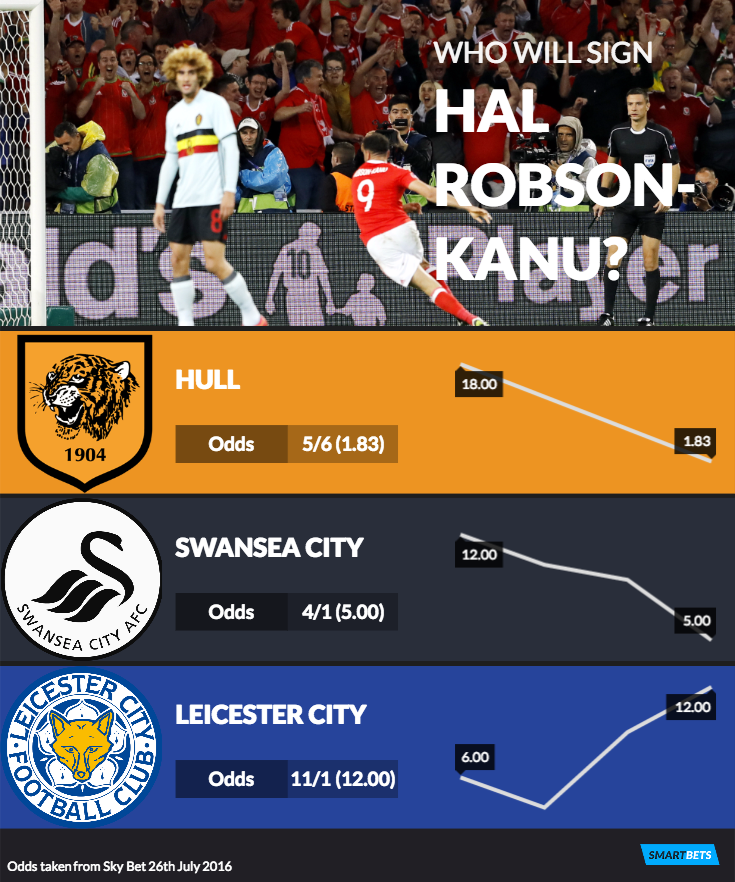 Odds linking Hull with a move for the forward have plummeted in the past three weeks, falling from an 18/1 (19.00) far-cry to their current state at 5/6 (1.83). However, there’s a major spanner in the works following Steve Bruce’s sudden resignation from the managerial post, and Sky Sports reported the move is now on hold as a result.

Swansea City will be thanking Bruce for disrupting what looked to be a sure move for Robson-Kanu, and they’re still 4/1 (5.00) second-favourites to bring the Welshman to the Liberty Stadium, far more promising than the 8/1 (9.00) odds they were found at in early July.

New Sunderland boss David Moyes could be on the lookout for a bargain or two as he seeks to make an impact at the Stadium of Light, and the Black Cats could be an intriguing dark horse at 20/1 to lure Robson-Kanu to the northeast, while Premier League new boys Burnley and Middlesbrough are at even longer odds of 25/1 (26.00).

As Hull and Swansea have moved up the order, though, the rest of the field has slipped away, with Premier League champions Leicester City now 11/1 (12.00) to land the free agent, while the Swans’ Welsh rivals, Cardiff City, are in behind at 12/1 (13.00).

Robson-Kanu may be tempted to move to the top flight and capitalise upon his Euro 2016 flare in attention, but starting football is bound to be more likely in the Championship, with a rabble of second-tier teams mooted as potential destinations.

Nottingham Forest are still among the highest-placed options available at 18/1 (19.00) alongside relegated Norwich City and Wolverhampton Wanderers. Birmingham City and Aston Villa are also matched in price at 22/1 (23.00) to snag his signature ahead of a raft of 25/1 (26.00) Championship outsiders, including Blackburn, Fulham, Huddersfield and Ipswich Town.