It’s been 21 years since Robbie Keane left Ireland for his first professional club Wolverhampton Wanderers, and the free agent has been tipped to join Shamrock Rovers, What Are The Odds has analysed the chances of the next club to land Keane’s services.

The Dublin-based Rovers are 5/4 (2.25) to recruit Keane following his departure from Major League Soccer giants LA Galaxy, although wage demands mean the move could  struggle to get off the ground.

However, it's reported in the Irish Independent that Keane is now in training with the Irish club, but the report does say that the striker's presence at the club is 'based around maintaining his fitness and is unlikely to extend beyond the end of this week'.

Championship side Brighton and Brighton and Hove Albion may be more readily equipped to deal with Keane’s salary, and the Seagulls are next in line to inject some hitman quality into their squad, valued at 9/4 (3.25) to seal his signature.

But at the age of 36, Republic of Ireland cap record-holder Keane may fancy something more akin to a pension, meaning an 8/1 (9.00) move to any club in Australia’s A-League may be preferred. Or, perhaps the forward would prefer a move back to Major League Soccer or a new venture in the Chinese Super League, each priced as 12/1 (13.00) options that could hold huge value to punters. 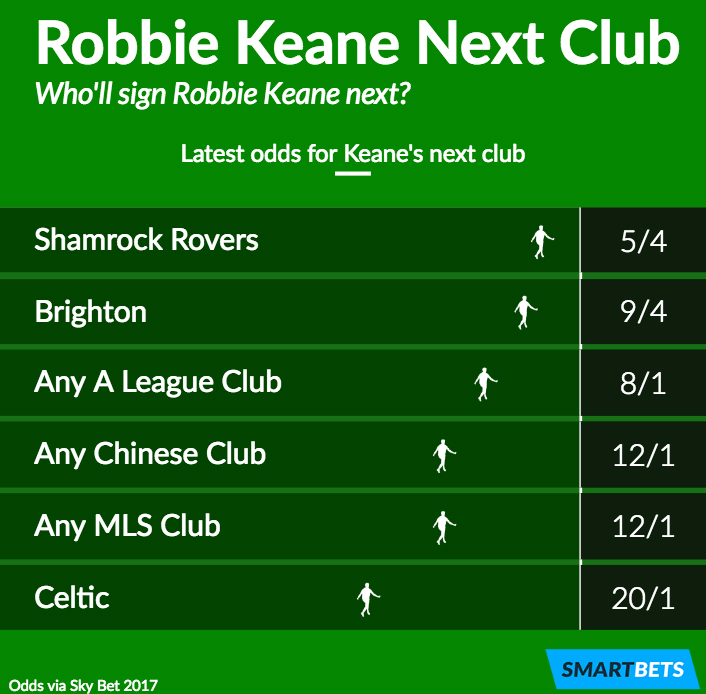 There are some familiar locations in the mix, too. Of the 12 betting options linked to Keane, he’s already represented a fair few of them, with Celtic the lowest price of the former clubs at 20/1 (21.00) and Leeds United further out at 25/1 (26.00).

Celtic’s Irish links and his previous loan spell in Glasgow mean that move may hold particularly strong value, although Brendan Rodgers’ side may also struggle fitting the forward into their wage packet.

Probability of Robbie Keane's next club