Rudy Gestede’s arrival at the Riverside Stadium means a deadline day exit looks even more likely for Middlesbrough striker Jordan Rhodes, and a raft of clubs have been linked with the former Championship ace.

The former Huddersfield Town and Blackburn Rovers hitman is favoured to join Sheffield Wednesday this month, and What Are The Odds has the latest on who’s racing to draft the Middlesbrough misfit, per Sky Bet.

A drop back down to England’s second tier looks most likely for Rhodes, who has already scored a very respectable tally of 91 goals in 189 Championship appearances.

And the Owls are in place to ensure he resurrects that account this season as they find themselves listed at 13/8 (2.62) to sign the Boro outcast, who made just his second Premier League start under Aitor Karanka in December’s 1-0 defeat to Southampton.

However, Wednesday coach Carlos Carvalhal recently dismissed talk of a move for Rhodes when speaking to BBC Radio Sheffield, where he said:

“People must understand that since the beginning we know where is the best players in the competition, but we can’t put the club in embargo,” Carvalhal said. “We have Financial Fair Play - this is important also - there are some clubs who maybe will be with problems now with Financial Fair Play, maybe, or in the end of the season but we are not [in this situation], we are trying to do things in the proper way. I don't think that we need a revolution here.” 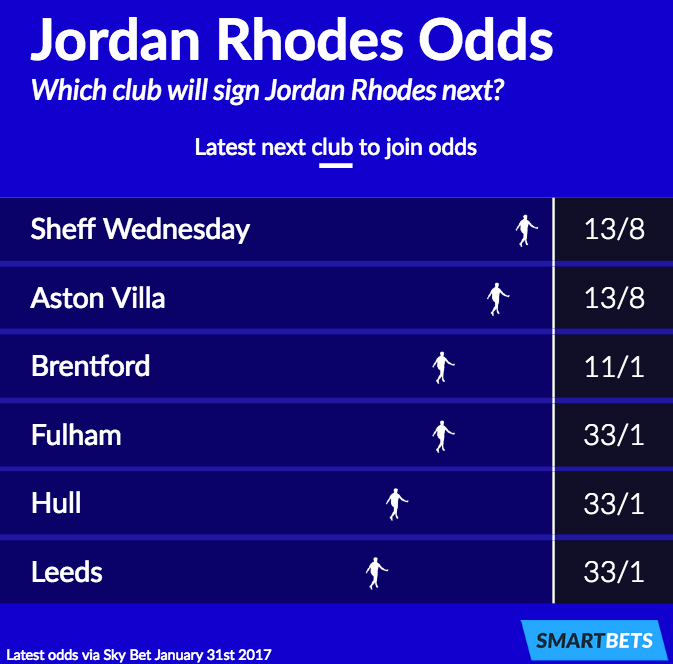 Fellow Championship side Aston Villa are priced exactly the same as Wednesday in the market as things stand at 13/8 (2.62) and are the only other club who currently look to be challenging Wednesday’s pursuit of the struggling forward, with Championship side Brentford (who are expected to lose Scott Hogan) next at 11/1 (12.00).

The Tigers aren’t the only Premier League club in the running for Rhodes, either, although Burnley, West Ham United and Leicester City are each acres outside the pack of favourites, listed at 33/1 (34.00) as things stand.

Probability of Jordan Rhodes's next club