Everton’s veteran defender Phil Jagielka is facing an uncertain few weeks at the club, with speculation mounting that the club are looking for new defenders in the summer, leaving the 34-year old’s future in doubt. What Are The Odds looks at what the future may hold for the former England international.

Sky Bet bookmaker have backed the Everton stalwart to move to any Major League Soccer club with odds of 15/8 (2.88), however they are still remaining conservative on whether he will actually leave Goodison Park and back him to stay with odds of 2/1 (3.00).

There’s no doubt that there would be plenty of interested clubs in the MLS wishing to snap up the experienced defender, who has featured in 25 Premier League games this season and scored three times.

If Jagielka is to opt for pastures closer to home then freshly-relegated Sunderland, under the defender’s former boss David Moyes, are backed at 4/1 (5.00) to recruit the defender to help the Black Cats back to the Premier League.

A more interesting and potentially more likely move if Jagielka is to drop down to the Championship would be his former club Sheffield United.

The red half of Sheffield find themselves back in the Championship next season and they will know that adding quality to their squad is the only way to compete in what is only become and ever more highly competitive league. Right now Sky Bet are backing Sheff United at 5/1 (6.00) - pretty favourable odds, especially if talks with Everton and Jagielka stall in the coming weeks.

Potentially more attractive Premier League options for the defender are Tony Pulis’ West Brom at 10/1 (11.0) and Sam Allardyce’s Crystal Palace at 12/1 (13.0). Both managers are known to build defensively solid squads and an available Phil Jagielka would surely be of interest to both clubs this summer. 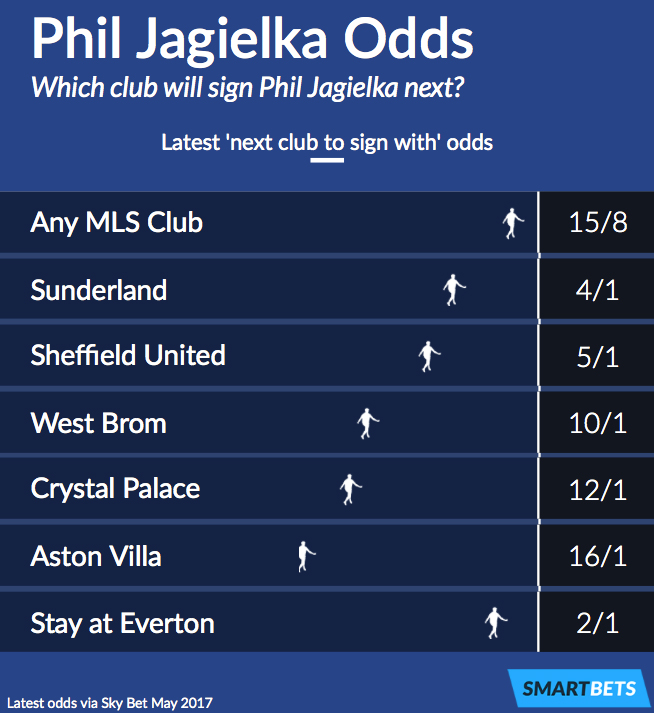 Aston Villa are a bit further back at 16/1 (17.0) and although there’s no ‘emotional’ reason for Jagielka to move to the second city club, it could be that the financial package and ‘project’ to return to the Premier League under Steve Bruce could be an appealing one.

Probability of Phil Jagielka's next club