In a season that brought Peter Crouch up to the 100 goals mark in the Premier League and the oldest to hit the landmark, doubts remain over whether the 42-time capped England international will remain with his current club Stoke City this summer. What Are The Odds looks at the possibilities and who is in the running to sign the 6 ft 7” striker.

With over 160 appearances for the Potters in the Premier League, Peter Crouch may just be looking to pastures new this summer with a view to having one more swing at being a number one selection for a club in-need of a ‘big man’ striker.

One of the most obvious links for Crouch to potentially fill such ambitions would be if former manager Harry Redknapp remains at Birmingham City next season. The Midlands club will be looking to reshape their squad after a disappointing season that ended in Championships survival (albeit on the final day with a 1-0 victory). Currently the bookmaker Sky Bet gives Birmingham City a 4/1 (5.00) chance to sign Peter Crouch, but it would seem that a few things need to fall into place before such a move can become more than just speculation.

The more ‘romantic’ choice (if you can actually call it that) would be a return to Fratton Park and Portsmouth this summer. Pompey have just secured the League Two title and promotion back to League One. With the club being linked to a wealthy owner and under fan control it would seem that the club is back on the up and in a much more healthy state of play. Crouch had two stints (and two seasons) at Portsmouth, scoring a total of 29 goals and in the process becoming a complete fan favourite.

Odds of Crouch dropping down to League One next season are currently 8/1 (9.00) and that indicates there’s a very real possibility, but it would be hard to imagine at this current time that there wouldn’t be an offer or two from a lower Premier League or upper Championship side if he does become available.

Two London clubs currently in the Championship, Brentford at 10/1 (11.0) and QPR at 12/1 (13.0) also represent viable options for the striker. In fact it was at QPR where Crouch really broke onto the scene, scoring 10 goals for the R's in the 2000-2001 season, however the club has been in a state of stagnation for a while in the Championship and the appeal may not be as strong as a return to a club like Portsmouth who are playing a league lower.

Two clubs are backed at 16/1 (17.0) and again both are former clubs of Peter Crouch. Firstly Aston Villa who are going to have to go ‘all out’ to gain promotion back to the Premier League next season, and managed by Steve Bruce could hold the biggest draw to Crouch. With two seasons in the bag at Villa Park between 2002-2004, it would be smart to see the ambition and the kind of players recruited before a move back to the Midlands club.

Southampton, who are safely a mid-table Premier League club are their main rivals according to the odds. With 12 goals in 27 appearances for the Saints the move looks appealing on paper, but would it just be a case of what he already has at Stoke? 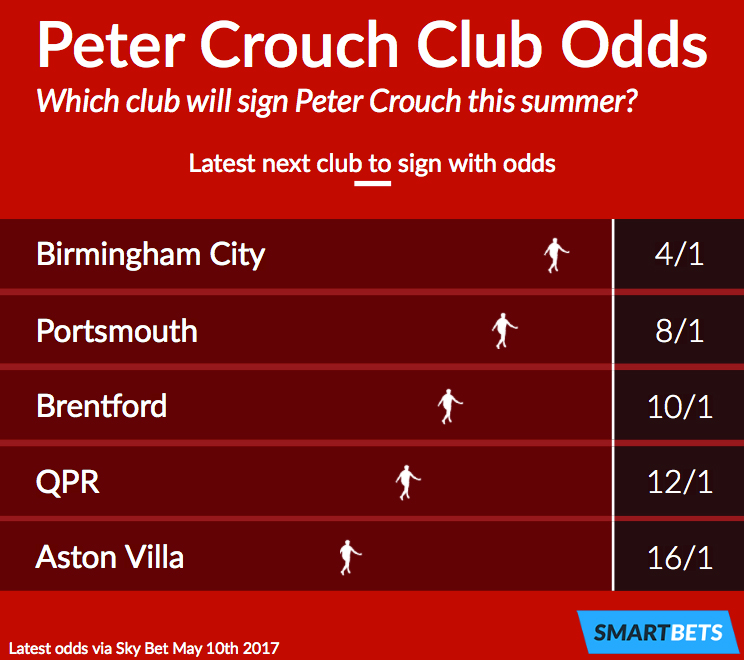 Norwich City are backed at 20/1 (21.0) and his hometown club of Macclesfield Town who currently play in the National League are the wild card option with odds of 33/1 (34.0).

Probability of Peter Crouch's next club