Reports are circulating that Alex Oxlade-Chamberlain wants to leave Arsenal after feeling underused, all in the midsts of a terrible run of form for Arsene Wenger's men which left them on the losing side of a recent 10-2 drubbing by Bayern Munich in the Champions League. What Are The Odds assesses the odds on where Alex Oxlade-Chamberlain could end up next.

According to a report by the SunSport Alex Oxlade-Chamberlain who has 18 months left on his contract apparently has no intention of renewing it and staying on at the club. Rumours have been rife for a while that the England international would eventually leave to get regular first team football, but with Arsenal’s season seemingly ending in a bad way, noises of unrest from behind the scenes are starting to creep into the press.

Manchester City are the favourites say Ladbrokes, who make ‘The Ox’ 3/1 (4.00) to make the move to the Etihad and be yet another Arsenal player to transfer to the blue half of Manchester (Gael Clichy, Emmanuel Adebayor and Bacary Sagna are some of the key examples).

Everton could be a very appealing option too under the guidance of Ronald Koeman (should he still be there this summer) and the chances of guaranteed first team football would appear to be far higher at Goodison Park. Odds of 4/1 (5.00) would suggest it’s a definite goer should the Toffees make a firm offer for Oxlade-Chamberlain.

Liverpool are another club that will definitely be strengthening in the summer, and although a signing like Oxlade-Chamberlain may not be a first priority for Jurgen Klopp, the potential availability will surely trigger interest from the Liverpool hierarchy. Defence is going to be the key area of transfer activity at Anfield but there’s no doubt the England international will be on the radar with odds with odds of 7/1 (8.00) on-offer.

His former club Southampton may have some pull, had they qualified for Europe (by winning the EFL Cup), however, with odds of 10/1 (11.0) it’s very much an outside punt, but longevity and a starting role in front of his first club could just get the move going. 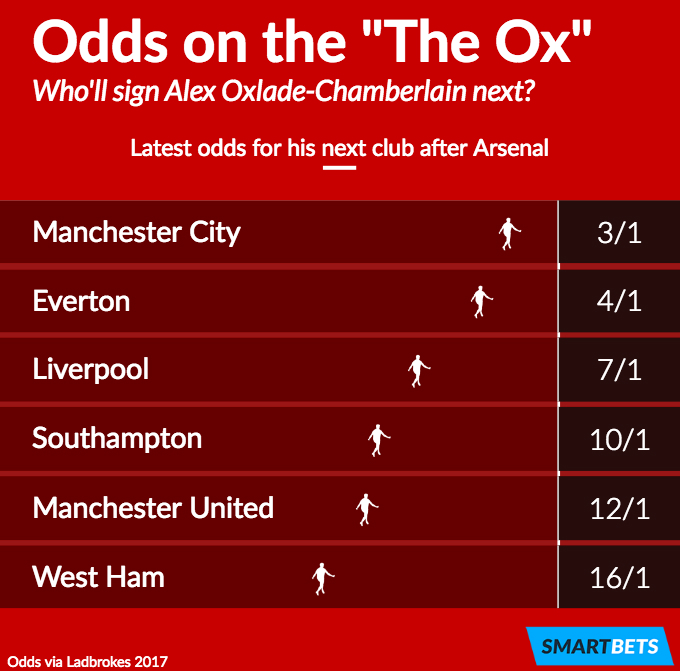 Manchester United are also linked at 12/1 (13.0) and so are West Ham at 16/1 (17.0) - with reports suggesting the Hammers will spend big this summer. For now, Alex Oxlade-Chamberlain remains and Arsenal player and a lot could depend on if Arsene Wenger leaves this summer, if he does, will the new man in charge want ‘The Ox’ in his starting 11? One to watch!

Probability of Alex Oxlade-Chamberlain's next club