After a whirlwind 2016, the gears to engineer the United Kingdom’s departure from the European Union appear to finally be setting in motion, and Brexit may not be far away after all.

A recent hastening in the process by Prime Minister Theresa May means 2017 now looks even more likely to be the year in which Article 50 is triggered, and What Are The Odds has the latest on recent UK politics markets.

Betfair have posted short odds of 2/15 (1.13) that the United Kingdom will trigger Article 50 between January 2017 and June 2017, giving punters about nine months to work with.

This fate seems all the more plausible after May informed the Tory Party Conference Article 50 of the Lisbon Treaty would be activated by March, to lead the UK out of the EU by the summer of 2019. William Hill are offering odds of 13/2 (7.50) on Brexit being completed by 2018 or earlier.

Plans are all well and good, of course, but those who believe we might see a delay in exit proceedings may wish to jump on the 26/5 (6.20) being offered on Article 50 not being triggered before July 2017.

Since the “Yes” vote triumphed in the Brexit polls earlier this year, news of the EU Referendum has dropped significantly, and it may not be a surprise to observe delays in such a massive step for UK politics, not to mention the economy.

On the other hand, the UK government could shock the masses and get ahead of schedule this time around, with a price of 24/1 (25.00) being offered on Article 50 being triggered before the end of 2016. 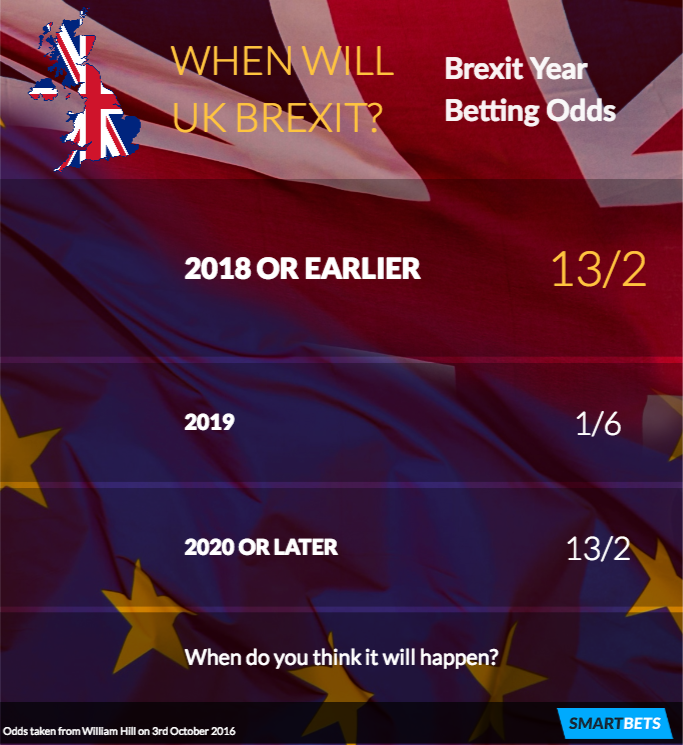 Many conservatives may be pleased with the work of Prime Minister May following her few short months succeeding predecessor David Cameron, but it may not be long until we see someone new in the hot seat.

That’s after odds being offered on when the next general election will take place altered, although 2017 remains the favourite at 9/4 (3.25) with Paddy Power.

That being said, with just under three months of 2016 left, punters need not rule out a snap election before the end of the year, currently priced at 11/4 (3.75), meaning May shouldn't get too comfortable just yet.

Paddy Power also provide odds of 8/11 (1.73) that at least five current Labour Members of Parliament will divide to form a new party before the next general election, and after seeing some dissatisfaction with leader Jeremy Corbyn’s re-election, that outcome may not be a stretch.