Wolverhampton Wanderers are wasting little time as they search for the successor to axed manager Walter Zenga, and Paul Lambert (former Aston Villa boss) is a firm favourite to land the Molineux manager’s job next.

What Are The Odds has broken down the latest on who’s jostling to be named the next Wolves boss, courtesy of Sky Bet, and the competitions is rife as 39 tacticians come linked with the role.

Paul Lambert is now the favourite, and so much so that his odds have been suspended with the bookmaker. This will mark his return to England’s second tier, having activated a release clause in his Blackburn Rovers contract that allowed him to exit the club in May this year.

Lambert will have to win over Wolves fans quickly having managed rivals Aston Villa, but the faithful will be hopeful that the Scot can bring the good form he had during his stint as Norwich manager.

It’s been about a month since Pearson was handed his marching orders at Pride Park, winning just three of his 14 matches in charge of Derby County, but the former Leicester City and Southampton chief was the favourite to get his Championship return in the West Midlands. However, it seems that Wolves are heading in another direction, which will be a blow for Pearson who would have had a chance to repair his reputation. Interestingly, under his charge, Derby were equal to a win percentage of just 21.4%, the second-worst ratio of his career, falling only behind his six-month spell in charge of Carlisle United at the turn of the millennium.

Dougie Freedman, 42, is still among the leaders for the Wolves position, and the Scottish manager certainly knows the league having managed Nottingham Forest, Crystal Palace and Bolton. That being said, Freedman’s chances look to had taken a turn for the worse after he was initially a 4/6 (1.67) favourite to be named Zenga’s successor, now falling to 9/2 (5.50).

Shamed one-time England manager Sam Allardyce might look to the Championship for his move back into management, and he’s 14/1 (15.00) to land the gig, while no next manager market would be complete without the mention of Ryan Giggs, currently listed at 25/1 (26.00) to take the position at Wolves.

Zenga’s appointment at Wolves was a show of intent by the club, and it appears clear the Fosun International-owned outfit have no intention of restricting their managerial prospects in hiring his replacement. Former Spurs and Chelsea boss André Villas-Boas is still in the picture to take over at 25/1 (26.00), while ex-Manchester United boss Sir Alex Ferguson—still retired—is the least likely of all contenders at 50/1 (51.00). 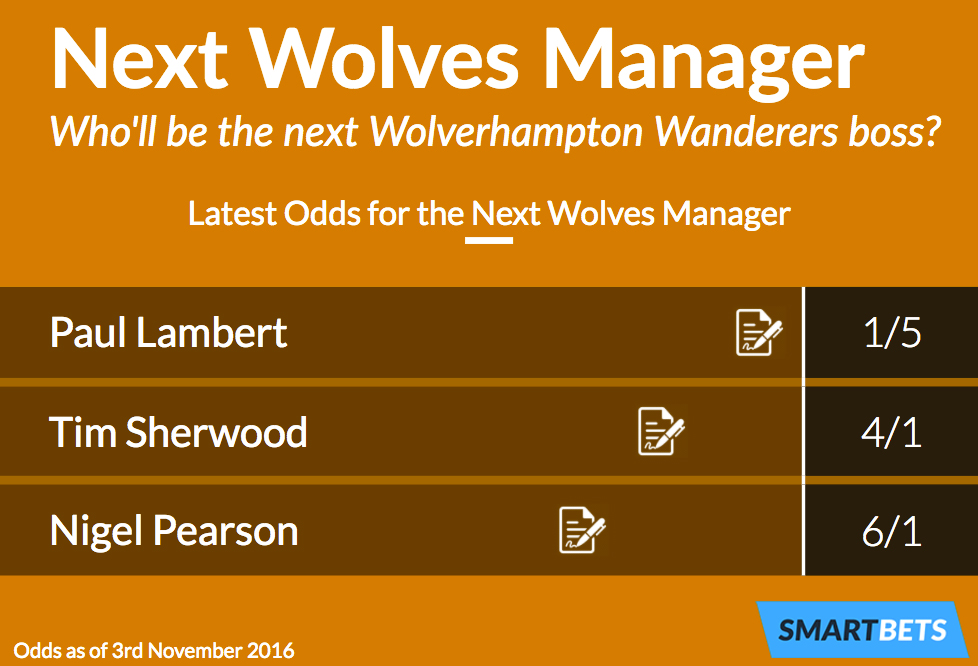