Gordon Strachan’s time as Scotland manager could be drawing to a close if the headlines are to be believed, with the former Celtic chief in danger following a run of poor results. However, it has been stated that Strachan will stay in charge until 'at least' the England fixture in November.

Aberdeen boss Derek McInnes is in the picture to take over should Strachan be shown the door, and What Are The Odds has analysed the latest markets on who could take over the Scotland helm, courtesy of BetVictor.

McInnes has led the Dons to a record of four wins, three draws and just one defeat in eight Scottish Premiership outings so far this season, sitting in second place and just four points from leaders Celtic. It might not be a surprise to see the Scot listed as a 9/2 (5.50) contender to take over the national team therefore, considering his work on the domestic level.

The 45-year-old has amassed the best win record of his managerial career since moving to Pittodrie Stadium in 2013, winning 90 of his 163 matches in charge, equal to a win ratio of 55.56%.

Paul Lambert would be a much easier target for Scotland and is also currently at 9/2 (5.50), having failed to pick up another managerial role since leaving Blackburn Rovers at the end of the 2015-16 campaign. The 40-times capped ex-Scotland international had held his fair share of successes at the helms of Norwich City and Aston Villa, but the Scottish Football Association may be reluctant to invest in a boss who's stock is quite low at this time.

However, there’s a long list of suitors being linked with the Scotland job should Strachan leave, and Sunderland boss David Moyes is 8/1 (9.00) to take over at Hampden Park, despite the fact he’s still very much under the employment of a Premier League club.

Interestingly, it's notable in the last 24 hours that ex-Iceland and Sweden manager Lars Lagerback has entered into the running, according to BetVictor. 10/1 (11.0) odds is certainly an interesting pick, as Lagerback is currently unattached after departing as a cult hero in Iceland after Euro 2016, and with a track record of taking so called 'smaller nations' to major tournaments, Scotland would be well placed to take a look at the Swede. 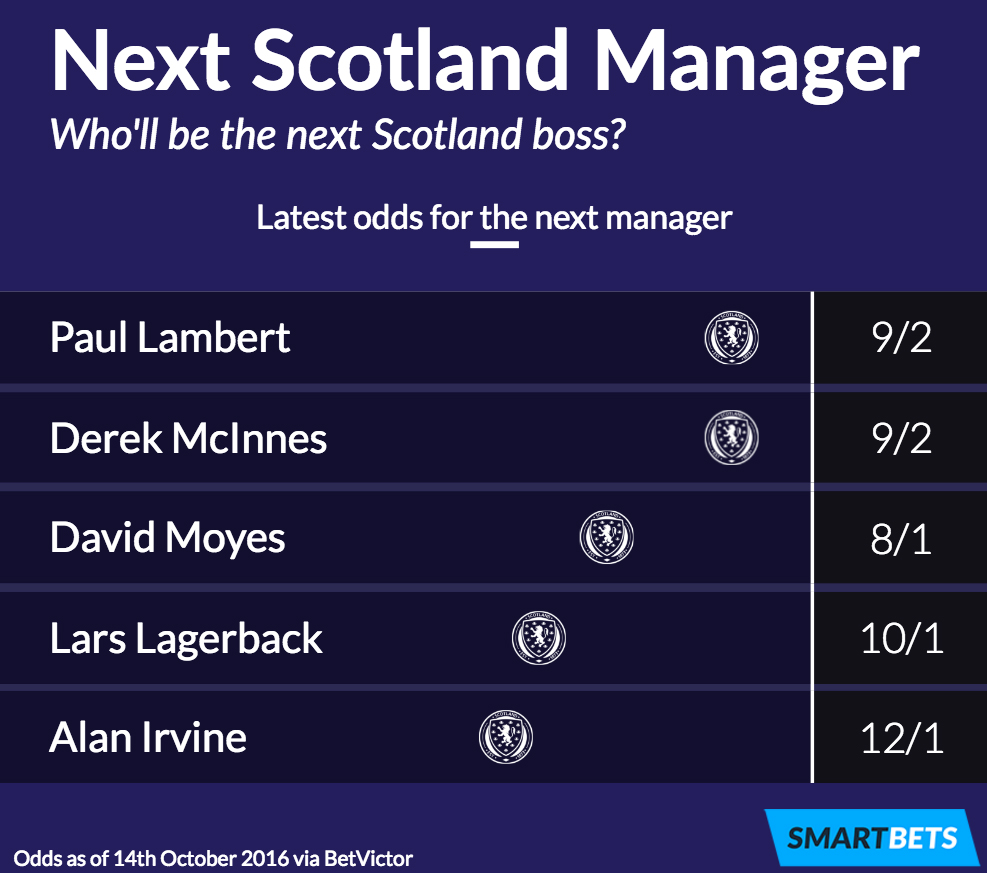 The list of contenders takes a turn from there as Joe Jordan, Alan Irvine and Steve Clarke each enter the stakes priced at 12/1 (13.00), all with the common factor of not holding full manager positions.

Jordan hasn’t held a senior manager role since leaving Bristol City in 1997, while Clarke and Irvine, both of whom have managed West Bromwich Albion in recent years, are currently serving as Aston Villa caretaker manager and Norwich City assistant, respectively.

Sir Alex Ferguson even makes an appearance as a betting option at 16/1 (17.00) alongside Alex McLeish, but it seems highly unlikely the former Manchester United chief will leave retirement at the age of 74, especially for quite such a stressful job.

Sat alongside the Old Trafford icon is another pair of Scottish legends in the shape of Kenny Dalglish and Graeme Souness, the latter of whom hasn’t managed in a decade, but that hasn’t stopped him also entering the conversation as a 16/1 (17.00) punt.