Norwich City are still on the lookout for a new manager, and the search has stepped up again after two of their targets took new jobs, Gary Rowett to Derby County and Mark Warburton to Nottingham Forest. What Are The Odds looks at who the Canaries may go in for.

Could it be that we soon see the former Crystal Palace and Newcastle United manager Alan Pardew back in the dugout, this time at Carrow Road? Pardew is currently being backed as the favourite for the post with odds of 5/4 (2.25) with Ladbrokes. No doubt the 55-year old has the pedigree to help take Norwich back to the Premier League, having guided West Ham to promotion via the playoffs back in 2005.

One that has fans split is the man just behind in the market, the former England manager Roy Hodgson. Again pretty short odds of 5/2 (3.50), could seemingly put the highly experienced Englishman back on the managerial scene, albeit at a lower level in the Championship.

Preston North End boss Simon Grayson finds himself way back at 10/1 (11.0), seemingly showing that the markets feels this is now a two-way race to become the next Norwich City manager. However, Grayson has overachieved with PNE in the Championship this season and did very good work during his spell with Leeds United, and although the outside bet at this time, a move for the 47-year old would surely be welcomed by the yellow and green faithful.

Tim Sherwood is another outside choice, a bit longer at 12/1 (13.0), but the former Spurs and Aston Villa boss, currently on the books at Swindon Town, doesn’t carry the same clout in previous years and may be seen as the ‘wild card choice’ by the club board and fans. It would seem unlikely that board members like Delia Smith and ex-politician Ed Balls would make Sherwood a top priority at this point. 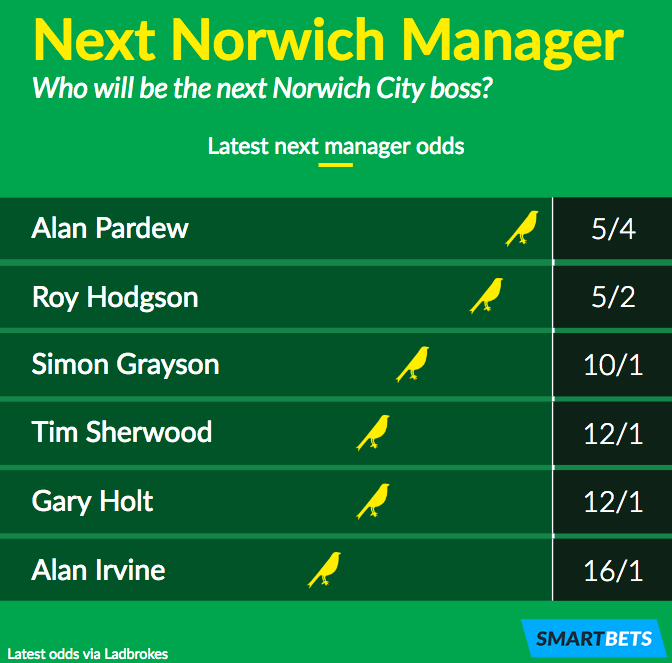 Caretaker boss Alan Irvine has ruled himself out of the running, and the bookmaker odds of 16/1 (17.0) reflects that. He has said categorically that he will “not be applying for the job”, via Sky Sports.

With the season seemingly petering out for the Canaries, it will be a job that will really be judged next season when Norwich will be expected to gain promotion back to the top flight of English football.

Probability of next Norwich City manager