The inevitable timer is ticking down to the Premier League’s first managerial sacking of the 2016-17 season, and Swansea City boss Francesco Guidolin leads the betting early on in the season.

Consistency is the only foundation upon which any top-flight manager can feel safe from the axe, and What Are The Odds brings you the latest on who’s most likely to get the chop first this term, per Sky Bet.

Guidolin is the clear frontrunner to get the boot next at 1/3 (1.33), despite leading his side to one win, one draw and four defeats in their first six games of the 2016-17 campaign.

The Swans currently sit 17th, just one point and one place above West Ham United, and their manager Slaven Bilic is next in the stakes to get given the heave-ho.

Bilic is currently listed at 4/1 (5.00) to depart next, and after a high-profile summer move to the London Stadium, he’ll be in line to take the hit unless their record improves soon.

Stoke City and Sunderland are also stuck in the relegation zone after six matches, with respective bosses Mark Hughes and David Moyes next at odds of 7/1 (8.00), 9/1 (10.00) to be the first Premier League manager fired.

The Potters and the Black Cats are the only teams in the division yet to win a game this term, but while Sunderland have grown slightly accustomed to a battle against the drop, this term has been far more disappointing for Hughes at Stoke. 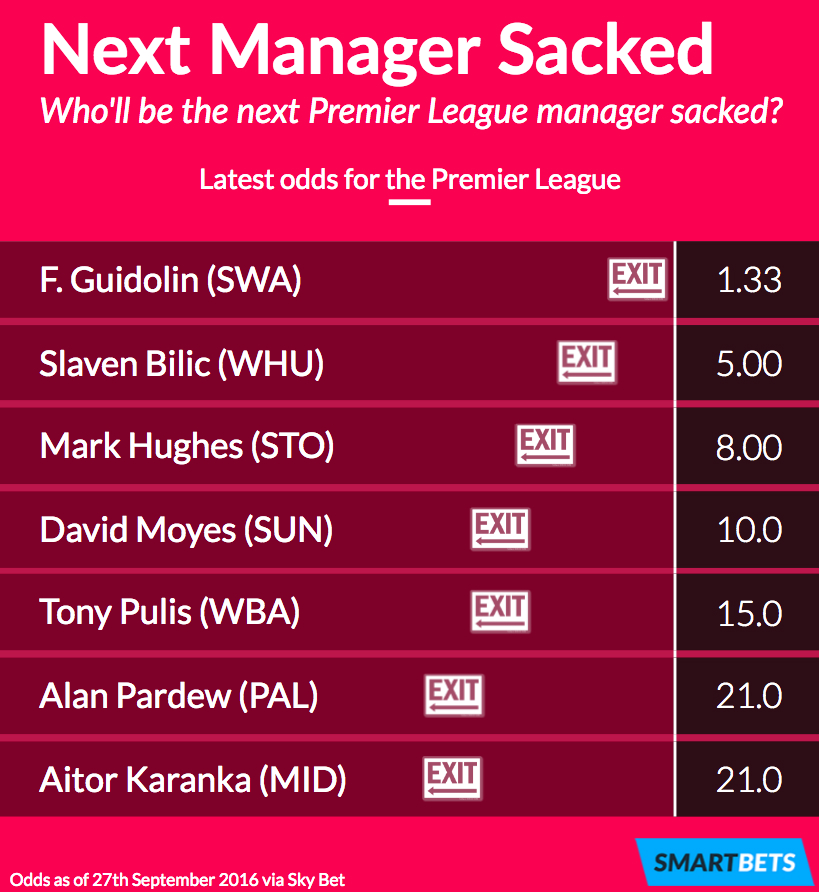 Arsenal manager Arsene Wenger remains a surprisingly low-priced option to be axed next and is stuck at 25/1 (26.0) after leaving a raft of his transfer business until the 11th hour and a mixed start to the season.

Looking towards the big players, even a Premier League title can’t secure Claudio Ranieri’s future, with the Leicester City boss a 33/1 (34.0) shot to be the next manager fired.

It appears both Manchester clubs are set to stick with their current leaders for the long haul, that is despite United boss Jose Mourinho's odds tumbling from 80/1 to 33/1 to be the next man out, while unbeaten City manager Pep Guardiola is a very long outsiders to be sacked next at 80/1 (81.0). Chelsea chief Antonio Conte is 50/1 (51.0).

As unlikely as it seems, punters can also back the 66/1 (67.0) long shot that no Premier League manager will get given the heave-ho this season, but that may be little other than wishful thinking.