Next England manager odds - Who are the candidates to replace shamed Allardyce?

Sam Allardyce’s reign as England manager is over after a Telegraph investigation turned up footage that has placed the tactician at the mercy of the Football Association.

Reporters secretly filmed Allardyce accepting £400,000 as payment to take on an ambassador role for a firm, as well as advising on “how to get around” the FA’s rules on third-party ownership and criticising predecessor Roy Hodgson.

Just two months into his Three Lions tenure and Allardyce’s run has come to a premature ending, and What Are The Odds has the latest on his potential replacements, with Sky Bet placing Gareth Southgate as the favourite to take over the job permanently.

Southgate was previously listed as a 3/1 (4.00) favourite to get the top manager position at the back-end of June, and he’s right back where he was, but even shorter with odds of 6/4 (2.50), after being placed in charge on a caretaker basis for the next four England fixutres, including a home qualifer against Scotland in November.

Three successive Premier League wins have lifted Pardew’s Crystal Palace side up to seventh in the English top flight, but Pardew still trails in the odds back at 8/1 (9.00) to be given a shot at the top job. Fellow Premier League manager, Bournemouth chief Eddie Howe, whose side currently sit 15th, is priced the same at 8/1 (9.00).

Both Pardew and Howe could be more difficult targets given they’re both employed by Premier League clubs as things stand, but the same can’t be said for Steve Bruce who’s listed as the hot second favourite, 2/1 (3.00) to be given the nod. Bruce was fiercely linked with the position prior to Allardyce’s appointment after he left Hull City this past summer.

Just like after the departure of Roy Hodgson in the summer, Glenn Hoddle is once again among the frontrunners for the top post, that is despite not holding a managerial role since 2006 at Wolverhampton Wanderers. Odds of 6/1 (7.00) and on the former England manager who guided the Three Lions between 1996 - 1999. 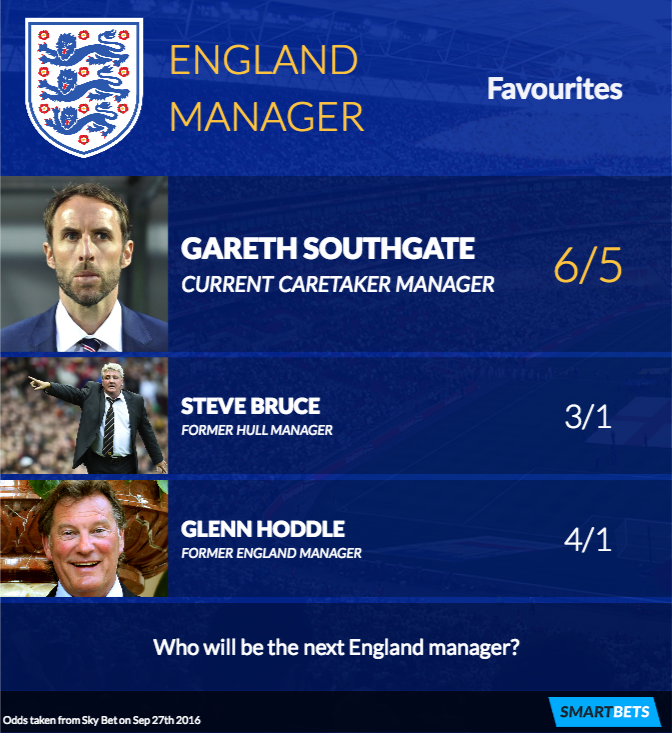 United States coach Jurgen Klinsmann is also more of an underdog’s pick at present, falling from 7/1 (8.00) three months ago to his current odds of 14/1 (15.00), almost halving his chances of landing the hot seat.

Gary Neville served as assistant manager to Hodgson in the past, and despite having only a few months of experience as Valencia manager to his credit, the former Manchester United defender is now 25/1 (26.0) to be the next England boss. One-time Newcastle United manager Alan Shearer is similarly unseasoned in management, but that hasn’t stopped him rising to 25/1 (26.0).

Should the FA choose to hire a foreign manager next, unemployed former Manchester City and Inter Milan boss Roberto Mancini could be a fine option at 28/1 (29.0), while Laurent Blanc, who stepped down as Paris Saint-Germain manager this summer, is a 33/1 (34.0) option.