Crystal Palace fans are up in arms after the latest defeat for the Eagles, in what is already being billed as the match of the season at the Liberty Stadium, where Swansea took a last gasp 5-4 winner. What Are The Odds looks at the possible replacements and favourites for the Palace job with Alan Pardew’s position looking increasingly untenable.

The journey home for travelling Palace supporters from South Wales would have given them plenty of time to realise that this was Palace’s sixth successive league loss and the unfortunate mantle of having the worst record in 2016 of all 92 of England’s league clubs. So what now? Some reports are suggesting Alan Pardew will be given a bit more time, but there are already plenty of names in the mixer to takeover at Selhurst Park and Paddy Power have named the former England manager as the favourite.

If your team needs to stay up, give Big Sam a call. With a record of never being relegated and having kept Sunderland up impressively, Sam Allardyce is the man being linked with the hotseat and a Premier League return. After being sacked in disgrace as England manager, after just one game, would the 62-year old be tempted to throw himself back into the British media spotlight? Odds of 17/10 (2.70) are a decent price, with still some value to be had, and could increasingly shorten should Pardew lose his next home game against Southampton this weekend.

Next in the market is the now unemployed Jurgen Klinsmann, who was relieved of his duties as US national team manager recently. The German is best-known in England for having a starring, playing role with Tottenham in the 90’s and for managing Germany, Bayern Munich as the US for five years. Would an untried English club manager like Klinsmann mend the defence and sure up a climb in the Premier League table? Odds of 10/3 (4.33) suggests the notion has legs, but may just be conveniently linked due to his departure in the US quite recently. One for Palace fans to watch.

Chris Coleman is another option at 12/1 (13.0) to make a management return to London, having managed Fulham between 2003-2007. Palace fans though have reason to want the 46-year old Welshman, having guided Wales to the Euro 2016 semi-finals and a top 10 FIFA ranking. Colman was approached to become Hull boss earlier in pre-season but seemingly decided to stay on and help Wales to the World Cup 2018. Would the Palace job and obvious potential be a more attractive proposition for Coleman though?

Some other interesting names in the mix are Harry Redknapp would might fancy a ‘rescue mission’ in the Premier League. He’s next in with odds of 14/1 (15.0), and might even be able to persuade his relative Frank Lampard to come in and play at Palace, and Sky Bet are actually backing him at 1/1 (2.00) to sign with them next.

Ryan Giggs to be given his first management opportunity? Odds of 18/1 (19.0) seem to point to it being highly unlikely, while Burnley manager Sean Dyche is also in at 18/1 (19.0) - would it be a step up for the charismatic 'ginger Mourinho’? 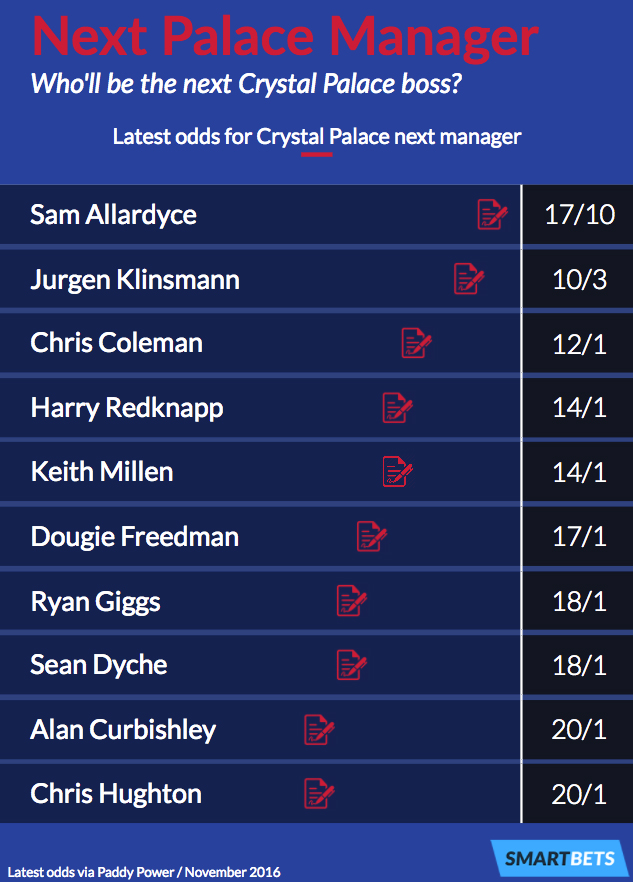