The gloomy atmosphere around Arsenal took yet another wrong turn at the hands of Crystal Palace, a 3-0 drubbing by the relegation threatened club heaped the misery further on Arsene Wenger’s Gunners. The 67-year-old Frenchman is under more pressure than ever before, with calls for his departure getting louder and the subsequent barracking of his players in the latter stages by Arsenal fans in the defeat at Palace a clear indicator things will have to change sooner than later.

Apparently Wenger has decided on what he will do next season, but the press, bookmakers and fans are left guessing at this point, leaving us at What Are The Odds to look at who could be the next Arsenal manager should a vacancy open up this summer.

The favourite for the post is the Juventus chief Massimiliano Allegri, who has led the Old Lady to Serie A domination (two titles) and a Champions League final defeat to Barcelona back in 2015, since being appointed in 2014. Very attractive odds of 3/1 (4.00) are on-offer at Sky Bet now.

It’s Diego Simeone, the Atletico Madrid boss who has long been tipped to take the reigns at the Emirates, but there is no denying he would likely adopt a whole new sort of style, which may ruffle the feathers of the club’s hierarchy. Currently he’s the second favourite for the job, but the odds are a bit further back that Allegri, with a price of 8/1 (9.00).

Unsurprisingly Thomas Tuchel at Borussia Dortmund who is among the favourites at 9/1 (10.0) to succeed Arsene Wenger. The brand and style of football would suit Arsenal fans and the young German manager would certainly know how to deal with the expectation, the pressures of the Champions League and a league title chasing campaign.

A bit of an outsider at 14/1 (15.0) is Everton boss Ronald Koeman, but talk has intensified on his future this summer, with The Independent last month reporting that Arsenal are indeed interested in the Dutchman. Apparently members of the Arsenal board hold Koeman in high-regard following his recent work at the Toffees and Southampton, however this is where the managerial merry-go-round may kick-in.

Barcelona are also interested and he’s shorter odds of 5/1 (6.00) to return to the Nou Camp, after a successful time there as a player. 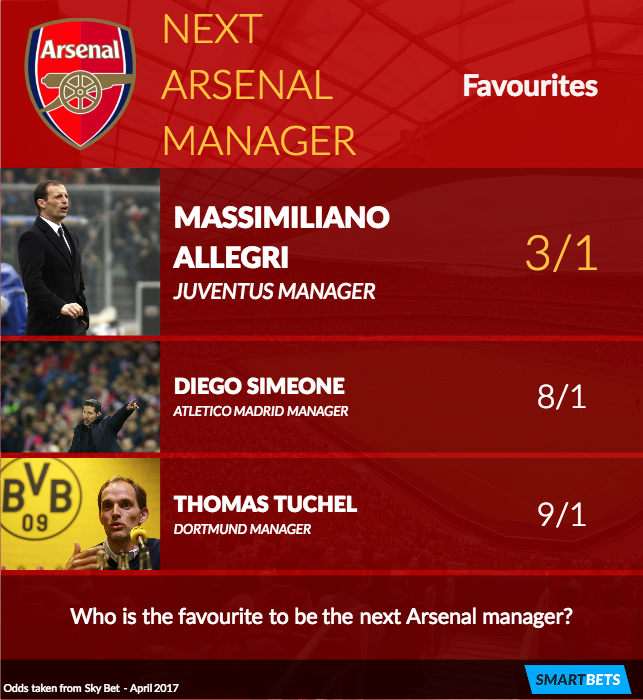 An interesting outsider choice for the hotseat at the Emirates is the current, but soon to be ex-boss of Barcelona, Luis Enrique. The 46-year old has masterminded Barcelona’s recent dominance domestically and internationally, but Enrique will step down as manager at the end of the season leaving the door open to a switch to Arsenal, should Mr Wenger step aside of course.

In a revealing interview with Four Four Two Enrique admitted he’d like to manage in England one day and if Arsenal is to be his next club then you can currently get odds of 16/1 (17.0) on it happening, a pretty decent price (with considerable profit) considering his availability and his trophy-laden CV.

Probability of next Arsenal manager