Jose Fonte’s days as a Southampton player look numbered after the centre-back’s transfer request has led to an apparent exodus from manager Claude Puel’s plans for the time being.

And Premier League clubs could capitalise, with West Ham United and Everton both listed by Sky Bet as frontrunners alongside Portuguese titans Benfica. What Are The Odds has the latest on where the Saint will fly next.

Both West Ham and Benfica are top of that pile at 4/1 (5.00) odds, and this could be Fonte’s last chance to bag a move to a club of the Eagles’ stature given he’s 33 years of age and coming off the back of a historic triumph at Euro 2016.

Having been left out of Puel’s squad for Saturday’s trip to Burnley - the first time that’s happened this season - a winter exit looks likely for Fonte, and Everton could be another plausible destination at 11/2 (5.50). The Toffees have already added to their midfield and attack this month with the additions of Morgan Schneiderlin and Ademola Lookman, but Fonte would be a welcome arrival in defence to aid the likes of Mason Holgate, Ashley Williams and Ramiro Funes Mori.

Manchester United are also cited as 11/2 (5.50) shots, although boss Jose Mourinho has previously suggested the club won’t be signing a centre-back this winter, while Sky Sports reported Liverpool - just behind at 7/1 (8.00) - are not interested in Fonte.

While that might whittle the crowd down, there are still a heap of top-flight teams linked. London outfits Crystal Palace and Arsenal are listed at respective odds of 9/1 (10.00) and 12/1 (13.00) to snag the defender before February 3rd, while fellow capital inhabitants Chelsea and Tottenham Hotspur are way off the pace at 25/1 (26.00) with Sky Bet, alongside faltering Manchester City. 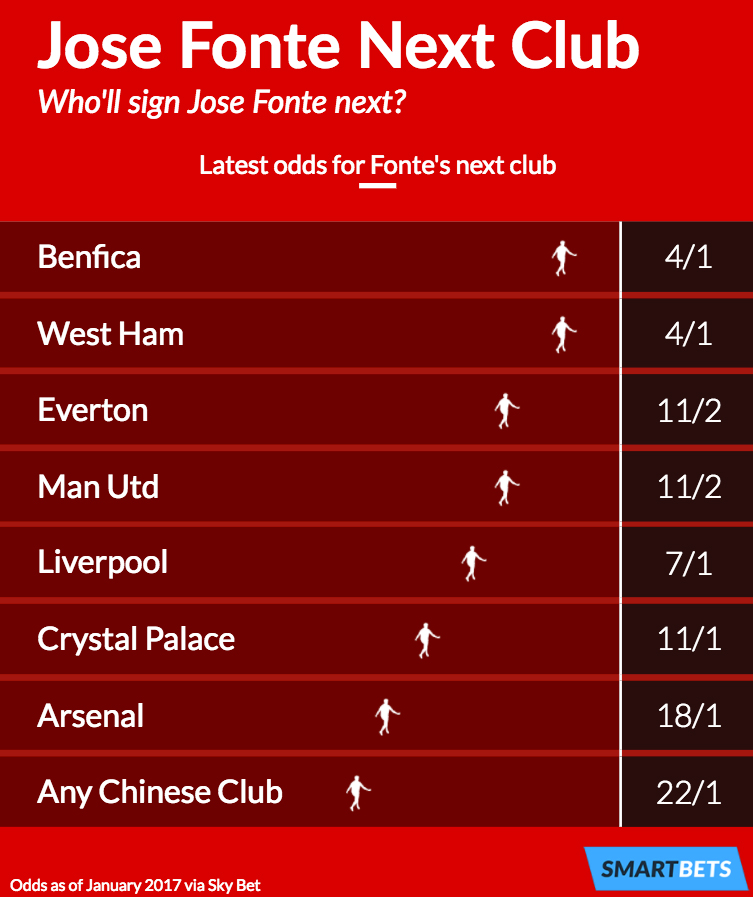 The likes of Stoke City, Hull City, Watford and West From may seem like something of a sideways, or even backwards step for Fonte, so they each look unlikely at 33/1 (34.00), although a move to China may not be all that far-fetched at 22/1 (23.00).

Fonte is likely to get the longer-term contract he’s understood to be chasing if he were to join the Chinese Super League revolution, while wages also wouldn’t be much of an issue for the veteran approaching his twilight years.

Amid all that speculation, Fonte is still at 2/1 (3.00) to stick it out and remain with the Saints until the end of the season, but the damage may have already been done.

Probability of Jose Fonte's next club