John Terry next club odds - Who is the Blue's captain about to join next?

John Terry’s time at Chelsea is coming to an end with the Blues captain announcing that he will be leaving the club that he has been at since 1995. What Are The Odds looks at what club might be the next destination for the 36-year old defender who appears to have more challenge in him.

Interestingly it’s Bournemouth that are the current favourites to sign John Terry at 6/4 (2.50) and that may have a lot to do with the ambition the Cherries showed in signing Jack Wilshire from Arsenal (on-loan) last summer, as well as the manager Eddie Howe who is keen to play an exciting brand of football that could be given a boost with the experience a 78-time capped England international could offer.

Tony Pulis at West Brom has give the Baggies a steely resolute that looks likely to lead the West Midland club to a comfortable top 10 finish in the Premier League, and Sky Bet back Terry to make the move to the Midlands at 3/1 (4.00). Pretty short odds with all things considered, but will John Terry want to experience life outside of the Premier League for a season or two?

If so, then an MLS club might be the direction he moves in. At 5/1 (6.00) it would be no surprise to see the former England captain land in a club like LA Galaxy (where former teammate Ashley Cole currently plays). He could also possibly follow in the footsteps of another former teammate in Frank Lampard who played under Patrick Viera at New York City FC. Moving stateside could be a commercially smart move and a fresh challenge which moving any lower in the Premier League might not offer.

However, it’s Crystal Palace and any Chinese club who are neck an neck at 8/1 (9.00) to sign Terry next in the betting market. Big Sam Allardyce loves to build around a strong defensive unit and Terry, even in his advancing years, would certainly do a job for at least a season. A move would look even more likely in the coming weeks should Palace confirm their Premier League status for another year.

Moving to China would bring financial rewards and the chance to link up with a litany of top stars currently plying their trade in the CSL. However, no major English player has crossed the line into the Chinese Super League yet, so it remains a doubt that Terry at 36, would do so.

If sentiment is where Terry’s heart and head is then a 12/1 (13.0) move back to his first ever club of West Ham United would make the most sense of all Premier League clubs. The chance to help the Hammers go to the next level at their new stadium could be just the lasting memory that would make such a return move appealing.

Celtic and Birmingham are at 16/1 (17.0) and both are complete outsiders, but would pose different challenges that could be appealing - especially if Harry Redknapp remains in charge of Birmingham next season. 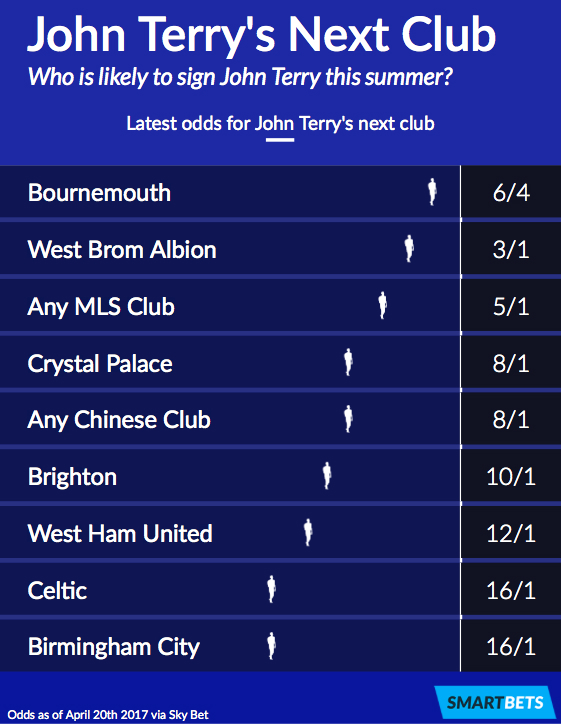 It’s a matter of time before Newcastle are promoted back to the top flight and they are backed at 20/1 (21.0) to bring John Terry to Tyneside - it could be one to watch as Rafa Benitez would certainly have enough leverage to convince the experienced defender that St James’ Park is the place to be.

Want an outside bet of all outside bets? Then back John Terry to make the controversial move to Manchester United at 25/1 (26.0) and link up once again with his former boss Jose Mourinho.

Probability of John Terry's next club