Henri Lansbury’s name has come right to the fore in recent days as transfer speculations surround his future intensifies. What Are The Odds looks at where the 26-year old, Nottingham Forest midfielder could be heading to in the January transfer window.

Henri Lansbury’s contract is set to expire in the summer, and with all contract talks on-hold until the club is sold to a new owner, it appears a cut-price deal and swift exit in January is on the cards for the Forest captain.

Derby County, under Steve McClaren, have been surging up the Championship table since Nigel Pearson’s departure and sit just outside the playoffs in seventh, and are now the favourite's to be Henri Lansbury’s next club of choice with odds of 5/6 (1.83), with Premier League Watford priced the same at 5/6 (1.83).

Birmingham City are also in the chase for Lansbury, with the playoffs still a possibility, the second city club could provide the platform for the 26-year old to potentially play Premier League football next season. Odds of 20/1 (21.00) on a move to St Andrew’s is far beyond the favourite option with BetVictor bookmaker, with the next available odds at 20/1 (21.0) with Burnley. 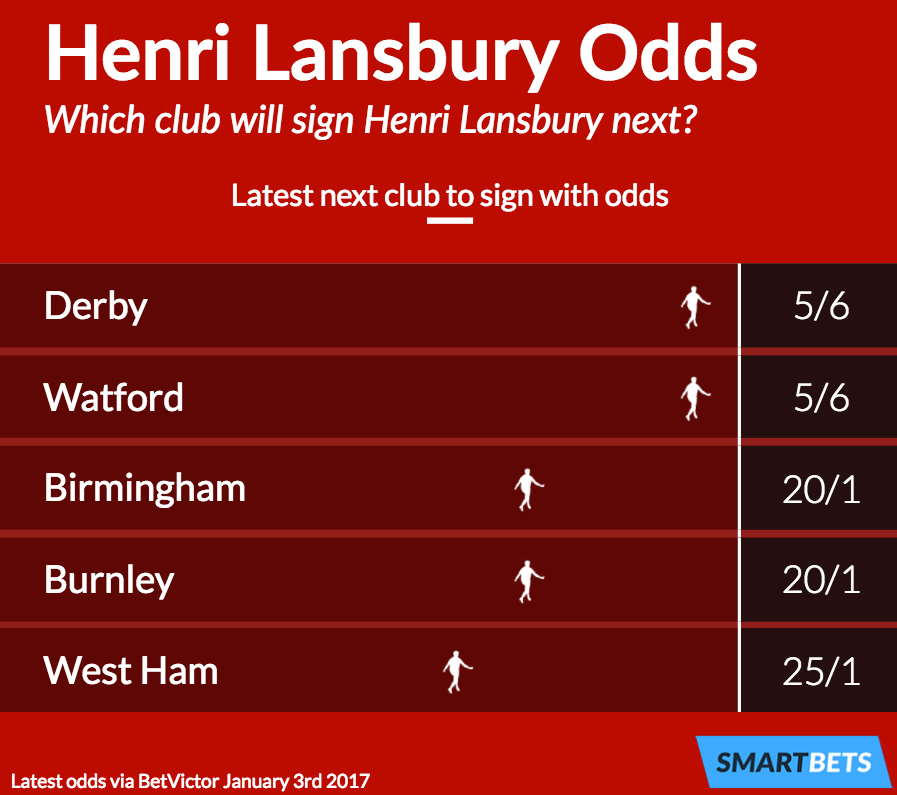 A move to Turf Moor to join up with the recently re-signed Joey Barton at Burnley could be an attractive option for Lansbury, with Burnley looking like they could just scrape relegation from the top flight, if the clubs below them continue to struggle.

High-flying Brighton & Hove Albion and Norwich are next up with pretty far out odds of 20/1 (21.0), but with the window still yet to open, there could easily be drops in price the nearer to January 1st. Norwich who have been struggling to hit the stride could do with a boost to kick-start their promotion push and a move for the enigmatic Lansbury could appease frustrated fans.

Premier League West Ham are also apparently casting interested glances at what’s happening with the midfielder at The City Ground, priced at 25/1 (26.0) and if his transfer fee is appealing then who knows what may happen - perhaps one to keep an eye when the window opens on January 1st.

Probability of Henri Lansbury's next club