Hull’s defeat at home to Sunderland last week not only put them on the brink of relegation, but also opened the door to the future of the Tigers star defender, Harry Maguire. What Are The Odds looks at what the future could hold for the English defender should Hull find themselves on a journey straight back down to the Championship.

According to The Sun newspaper at the weekend Tottenham’s odds on signing the 24-year old have slashed, and that couldn’t be more true with the 1/3 (1.33) on-offer from the bookmaker Sky Bet.

With many of Spurs’ best players being coveted by big clubs around Europe this upcoming transfer window, and whether or not their star players will want to stay at the club after another season without silverware, the signing of Maguire would be a solid bit of business - ensuring the White Hart Lane faithful continue to build from a position of strength.

Interestingly Newcastle, according to multiple sources, are the rumour mills other favourites to nab the Hull defender, that despite Sky Bet offering huge odds of 33/1 (34.0) on him moving to Rafa Benitez’s Championship champions.

Newcastle have wrapped up their season and thoughts and planning are now surely all on securing the kind of players they need to be competitive in the Premier League, and you can safely assume that they will be monitoring events this weekend, with Hull in-line to be relegated should they lose to Crystal Palace and Swansea win away at already relegated Sunderland.

Everton are considered a viable suitor for Maguire too, with odds of 6/1 (7.00) available. With Ronald Koeman’s side faltering and conceding goals in the end of season run-in, it will be a priority to secure quality to push the Toffees on to another top six / four challenge next season. 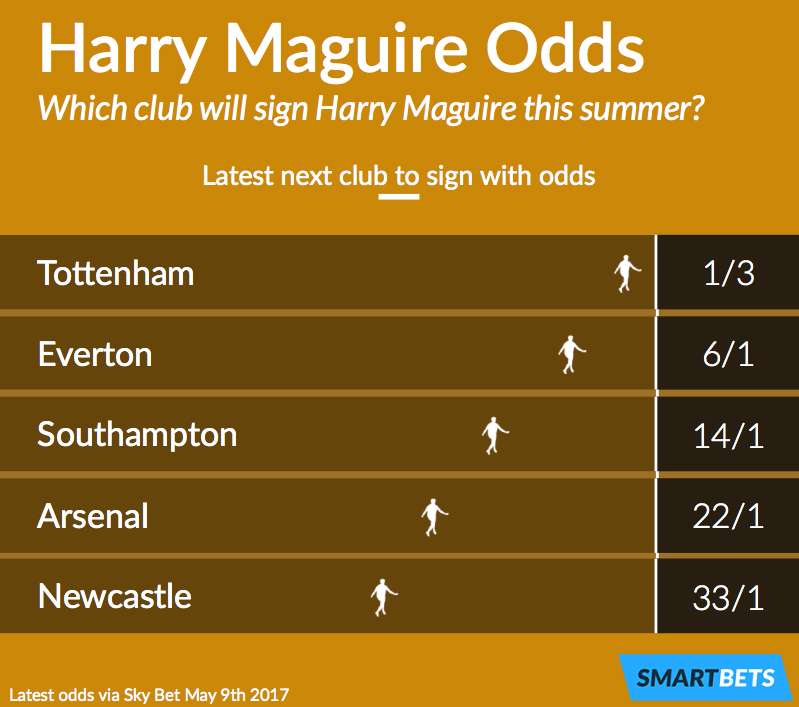 With 35 appearances under his belt in all competitions for Hull this season, his performances, goals and assists will surely make Harry Maguire one of the most prized assets in English football this summer, and with still time to go before the defender hits his career peak, it may just be ‘one to watch’ for a number of clubs when the transfer window opens.

Probability of Harry Maguire's next club