The race to sign Gylfi Sigurdsson is heating up with his club Swansea City heading in a very downward trajectory. The Welsh club are on the brink, with just a few games to go, of falling out of the Premier League and almost certainly meaning the departure of the Icelandic international. What Are The Odds looks at the odds of him moving this summer for pastures new.

Gylfi Sigurdsson, 27, is one of the league’s standout performers and would arguably not look out of place in a Champions League club squad, which is leading to talk of him making the move from south Wales in the summer. However, according to Sky Bet it’s not a club in Europe that are leading the way to clinch his signature, but top-six chasing Everton who are currently priced at 11/4 (3.75) to sign the Icelandic international.

West Ham United were the other club in January that were showing the most interest in Gylfi, with Slaven Bilic obviously a fan of a player too. The Hammers are just behind the Toffees with odds of 7/1 (8.00) to match what will likely be a hefty transfer fee. If Ronald Koeman’s side do qualify for European football it will make their pursuit of him that much easier, especially with former Swans captain Ashley Williams there to convince him of a move to Merseyside.

Southampton are the club making all the headlines with numerous reports, including Sky Sports, suggesting that Claude Puel’s side have made Sigurdsson their number one target, alongside Pontus Jansson at Leeds United. Despite a more clear urgency to bring Sigurdsson to St Mary’s this summer, the club are priced as outsiders to clinch to signing at 14/1 (15.0).

With nine goals in 35 appearances this season for a struggling Swansea side, there’s no doubt that a team in-form would benefit from a player of his class and this would be the second time that the Saints have pushed to sign him (having failed in an attempt last summer).

What about Newcastle United? With Rafa Benitez at the helm and a likely decent transfer budget should they play Premier League football again next season then it wouldn’t be a surprise to see the Magpies fly up the table, and that could be an appealing move for Gylfi who is priced at 9/1 (10.0) to make the move north to join former-teammate Jonjo Shelvey. 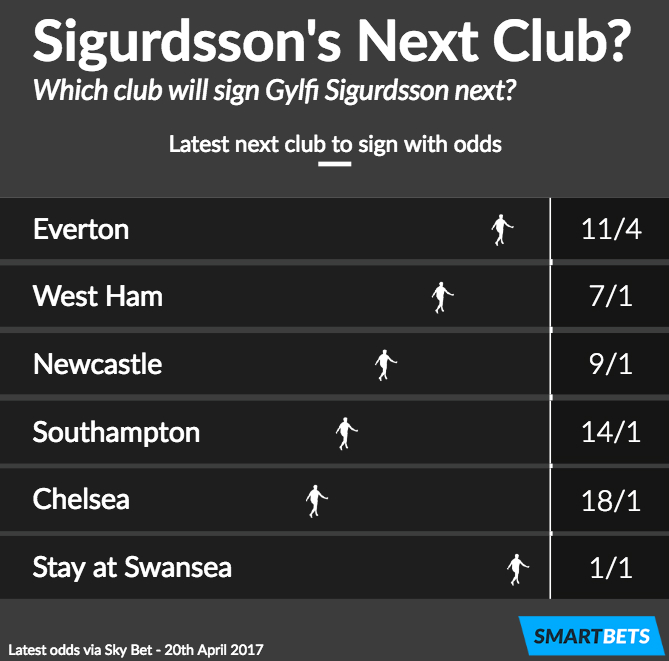 Chelsea are an interesting club in the mixer for Sigurdsson, albeit much further back at 18/1 (19.0). It would be hard to imagine where Sigurdsson would fit into the Blues squad with Hazard occupying the number 10 role. However, it would be surely too good a move to turn down for the Icelandic international, despite potentially more time spent on the bench.

Probability of Gylfi Sigurdsson's next club