Frank Lampard next club odds - Where next for legendary England midfielder?

With the legendary England midfielder Frank Lampard now clubless after announcing his departure from New York City FC, speculation has been rife as to the former Chelsea midfielder’s next destination, and there’s seemingly been plenty in the way of interest.

What Are The Odds looks at Frank Lampard’s next club as a player and potentially as a coach/manager.

So how does Frank Lampard the gaffer sound? Maybe it’s all a bit too much like the game Football Manager but Sky Bet are putting him in the mixer for two different jobs as it stands. The most likely of the two linked clubs is MK Dons, where he’s priced at 14/1 (15.0) to succeed the recently sacked Karl Robinson. Former England teammate Steven Gerrard is currently 4/1 (5.00), while another of his peers Ryan Giggs is valued at 9/1 (10.0).

The chances are pretty slim it seems, and those numbers look even less favourably when you see he is priced at 50/1 (51.0) to be the next Charlton manager. It would seem a much safer bet to stick with his next playing club odds instead, as Lampard looks destined for at least another six months of playing time. 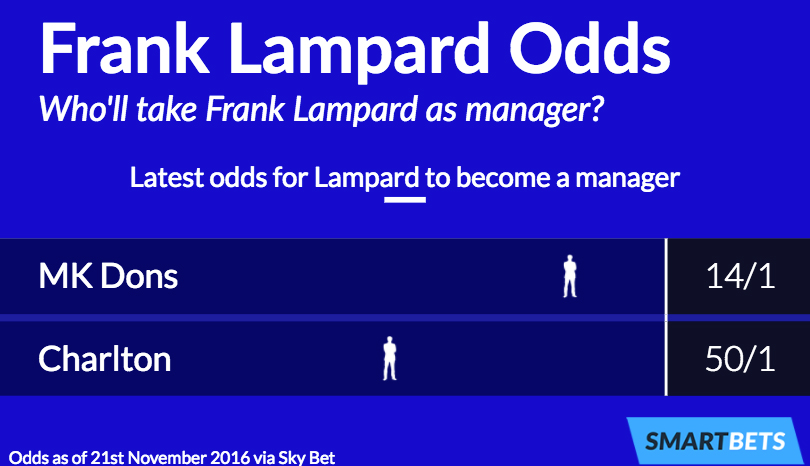 After departing New York City FC it was reported that both LA Galaxy and Orlando City were interested in keeping the 106 capped England international in the MLS. However, Sky Bet seem to be indicating that the Premier League is where Frank Lampard will play next.

Interestingly the club that started it all for Lampard, West Ham United are right in the running at 11/2 (6.50), but it’s in the south of London where he’s tipped to end up - with Crystal Palace. Alan Pardew would surely jump at the chance to boost his inconsistent Eagles with the quality of Frank Lampard, and odds of 1/1 (2.00) suggest he’s on the verge of pulling off a major coup. Another England international earlier turned down the chance to join Palace, in the form of Jack Wilshere, who opted for Bournemouth instead but the odds of Lampard to Palace now seem very favourable indeed.

Mark Warburton’s Rangers are in at 11/1 (12.0) while city rivals Celtic are priced at 18/1 (19.0), but it would be difficult to see the lure of moving to the SPL at this stage of Lampard’s career and a move back to London would make the most sense.

But if you want to another city rivalry potentially battling it out for Lampard then how about odds of 20/1 (21.0) on Manchester United reuniting him with former boss Jose Mourinho? Alternatively maybe Frank Lampard would would fancy another shot at playing for Manchester City under the charge of Pep Guardiola - far out odds of 33/1 (32.0) suggest it’s unlikely. 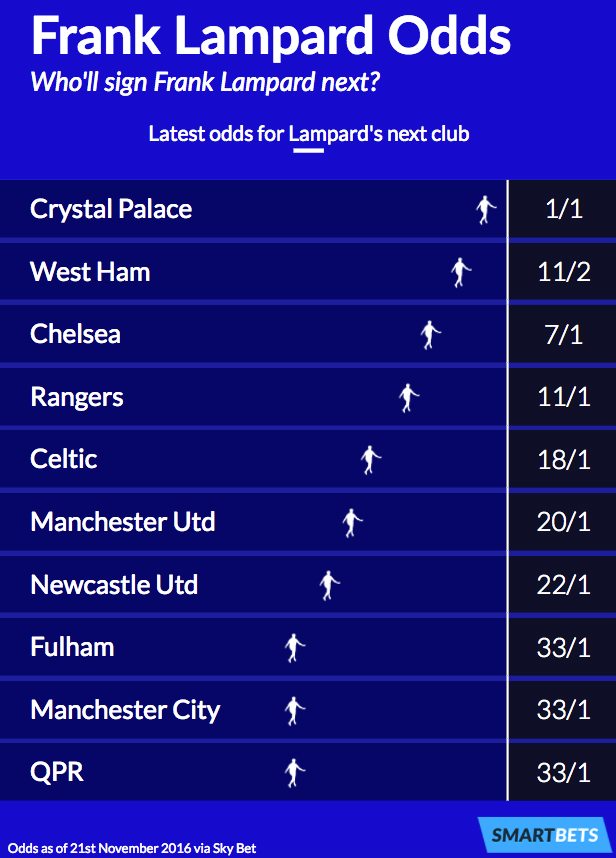