What a game we have in store at the Stade Velodrome tonight. With France on the verge of reaching the final of Euro 2016 on home soil, you can feel the excitement and anticipation in the air here in Marseille.

Being hosts gives Les Bleus a definite advantage against Germany – as does the fact that Didier Deschamps’ squad has a clean bill of health.

It’s unusual to reach this stage of a major tournament and have all 23 players available.

Just ask Joachim Low. The suspended Mats Hummels and injured duo Sami Khedira and Mario Gomez are missing. They will each be a big loss, even if Low has some pretty decent alternatives. 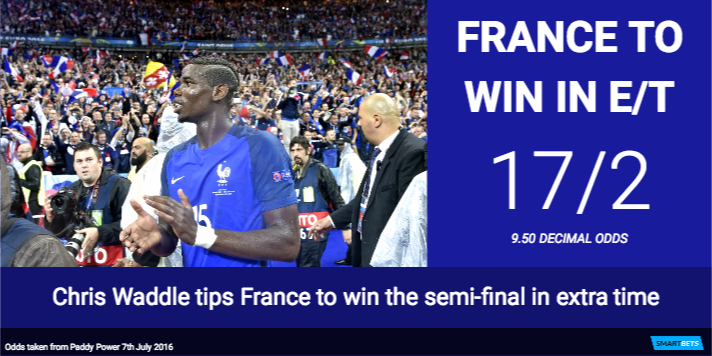 The world champions had to come through a gruelling quarter-final against Italy and the fact that their penalties weren’t up to the usual standard might just have chipped away at their confidence a little.

By contrast, France coasted into the last four with a comfortable 5-2 win, in what was a game too far for Iceland. They will be thinking it’s their time.

France are the competition’s highest scorers, averaging 2.2 per game. Antoine Griezmann leads the race for the Golden Boot after four strikes in five appearances. Olivier Giroud and Dimitri Payet have weighed in with three apiece.

The absent Gomez, with two, is the only German player to have netted more than once. You can never write Germany off, but there will rarely be a better scenario in which to play them.

Leonardo Bonucci’s penalty is the only time Manuel Neuer’s goal has been breached in the tournament so we can expect a tight game. My money’s on a 1-1 draw after 90 mins, with France to nick it in extra time.