Dimitri Payet’s West Ham United career hangs in the balance after manager Slaven Bilic revealed the winger no longer wants to play for the club, and former employers Marseille are interested in a January reunion.

Sky Bet have the Ligue 1 outfit priced at 4/9 (1.44) to lure Payet back to the Stade Velodrome this month, but the interest doesn’t end there, and What Are The Odds breaks down which clubs seem capable of completing such a difficult deal.

It’s been just over 18 months since Payet joined from Marseille for a fee of £10.7 million, but Bilic confirmed his playmaker no longer wants to represent the Hammers, per BBC Sport: "We have said we don't want to sell our best players but Payet does not want to play for us. We are not going to sell him.”

While those comments suggest Payet won’t be moving, the big-spending powers of the Chinese Super League might fancy their chances of poaching another Premier League name this winter, and a move to the Far East division is listed at 22/1 (23.00) as things stand.

Clubs from China may be some of the few who could raise the funds necessary to tempt West Ham into a sale, but they sit just in-front of another cash-rich powerhouse, Manchester United, who are 25/1 (26.00) to land Payet’s signature.

West Ham most likely won’t want to sell to a Premier League rival, however, and though Arsenal are 22/1 (23.00) in the market, Arsene Wenger has shown in the past that he’s stubborn when it comes to big moves in January.

If reports are to be believed, according to the Express, Man Utd and Arsenal have opened talks over the possibility of signing Payet - so it may just be a matter of time before the odds start tumbling in favour of the two Premier League giants.

Chelsea and Paris Saint-Germain could be another story altogether, though, and both clubs are currently 'in the running' at 20/1 (21.00) and 22/1 (23.00) to bag Payet before the winter transfer window is over. Chelsea in particular have money to splurge after selling Oscar to Shanghai SIPG for £60 million, and a move to west London would require only a slight relocation on Payet’s part. 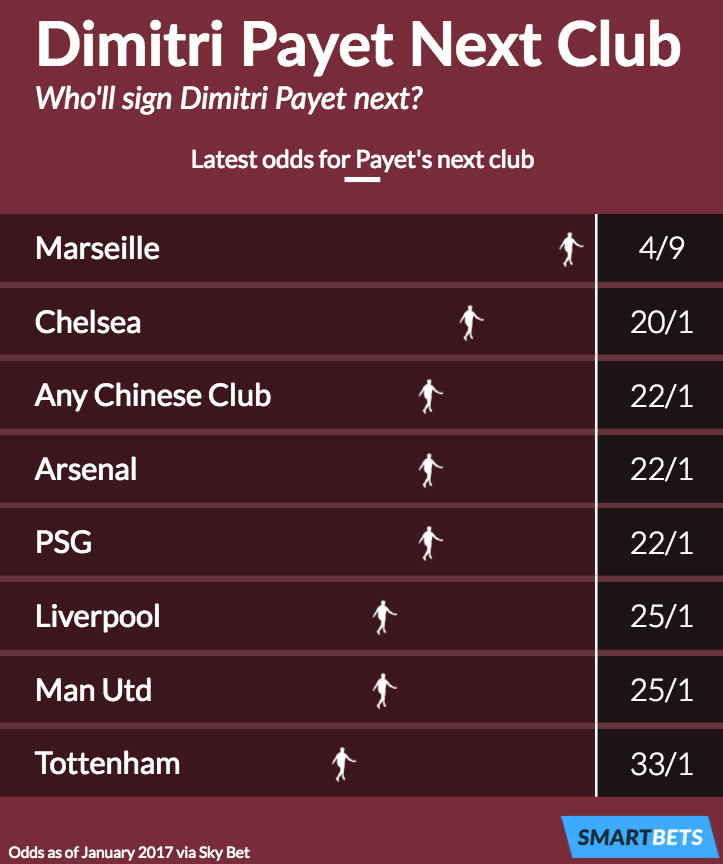 Probability of Dimitri Payet's next club