Dimitar Berbatov returned to our screens for the FA Cup fixture between Fulham and Tottenham last weekend, however not on the pitch but in the television studio analysing two of his former teams go head-to-head. He made it clear that he wants to get back to playing soon, so who could the former Man Utd and Spurs striker sign for next?

Bookmaker Ladbrokes is tipping the 36-year old Bulgarian to have another crack at the Premier League, with West Ham United the favourites to help boost their limited attacking options. Odds of 7/1 (8.00) suggest it’s speculation but nevertheless it’s a move that would make sense given Slaven Bilic’s preference for a big man in the box.

Remaining in London, after spells at Spurs and Fulham and links to West Ham means that Crystal Palace (obviously) have to be in the running too, with Sam Allardyce’s side struggling in the relegation zone, a move for another experienced player until the end of the season would again be logical, but would Berbatov fancy a potential relegation on his return to the top flight? Ladbrokes value the Eagles at 8/1 (9.00) to make the move to Selhurst Park.

A potentially intriguing move to Bournemouth is also fancied, with Eddie Howe in need of a spark to relight the Cherries season and stop it from leading to disaster he may turn to the experienced Berbatov, who after all has scored 94 Premier League goals. After losing striker Callum Wilson to injury for the rest of the season could Howe snap up the Bulgarian? Odds of 10/1 (11.0) are a bit out there but it may be a case of which club moves first.

Swansea were a club strongly linked to signing Dimitar back at the front end of the season, however a move never materialised. It would be hard to imagine him now gracing the Liberty Stadium in the immediate future, especially now with the in-form Swans ticking with Llorente up-front. Ladbrokes have still given a value of 14/1 (15.0) but it may just be in nod to him being linked previously. 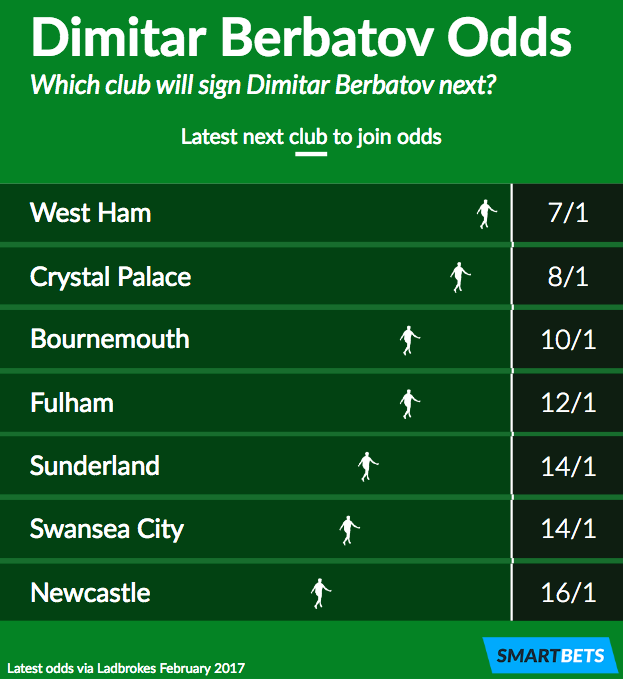 Probability of Dimitar Berbatov's next club