Following reports in May that new Manchester United manager Jose Mourinho could deem the defender surplus to requirements at Old Trafford, What Are The Odds examines what this summer holds for Daley Blind. 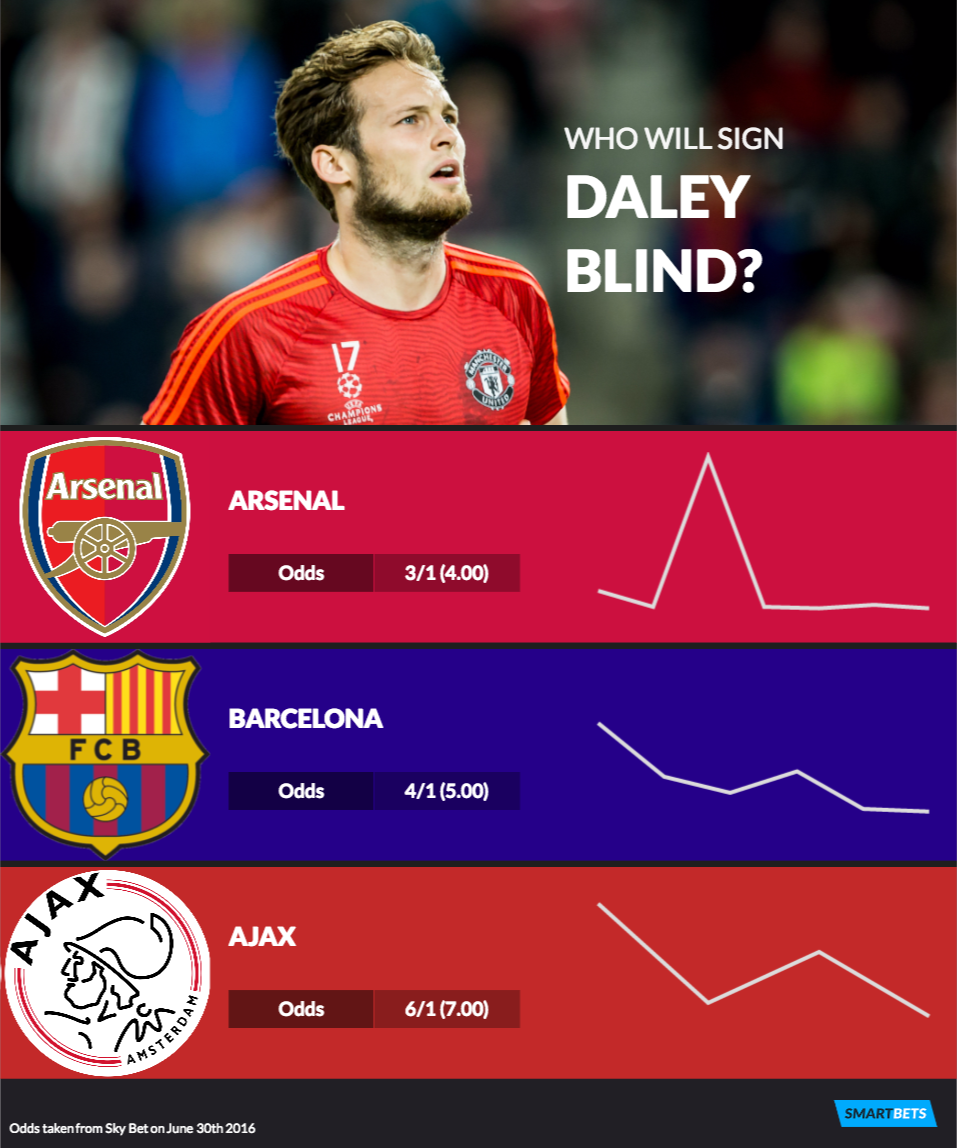 Having come through the ranks of Eredivisie pass-masters Ajax earlier in his career, it’s perhaps no surprise to learn Arsenal and Barcelona are frontrunners to land Blind at present, priced at 3/1 (4.00) and 4/1 (5.00) to sign the player this summer with Sky Bet.

The Netherlands international moved to United from the Amsterdam Arena after displaying impressive versatility with his national team at the 2014 World Cup. There, he lined up in central midfield and at left-back before finding his home in central defence at Old Trafford last season.

Having been schooled in the ways of totaalvoetbal - Total Football to you and I - Blind’s malleability and passing range could be seen as a valuable commodity in north London or Catalonia.

But the Gunners aren’t the only Premier League side in the running. Dutch compatriot Ronald Koeman now sits at the Everton helm, and the Toffees are 10/1 (11.00) to recruit Blind, while the tactician’s former club, Southampton, sit slightly further down the list at 14/1 (15.00).

Koeman also managed Ajax between 2001 and 2005, during which time he may well have become aware of a young Blind, who was at the time milling his way through the Eredivisie club’s academy.

Alternatively, Tottenham Hotspur can be found way down the odds as 33/1 (34.00) dark horses to make a move for United’s enforcer, but the Red Devils aren’t likely to sell to a side that finished two places ahead of them in the Premier League last season.

Looking at Blind’s options abroad, one can see Spanish suitors Valencia and Sevilla priced at 12/1 (13.00) and 18/1 (19.00), respectively, to get their hands on the player before the transfer window slams shut on September 3rd.

Having become suited to his Premier League wages in the past two years, Borussia Monchengladbach look a long shot to sign Blind at 20/1 (21.00), while Schalke are near the bottom of the pile at 25/1 (26.00), but a move for either Bundesliga outfit seems unlikely to materialise.

Amid all rumours of an exit, Mourinho could decide Blind is the man for him after all, and the player is 6/4 (2.50) to remain with the Red Devils for the upcoming season, although his future seems far from certain.