Aston Villa have but a day left to improve their squad after a disappointing start to the 2016-17 campaign in the Championship, with elite recruits and lower-profile names alike linked with a move to Birmingham.

What Are The Odds has the who’s who on stars that could join Roberto Di Matteo’s ranks before Wednesday’s summer transfer deadline, ranked from most to least likely based on the latest speculation.

Ravel Morrison could complete a return to English football sooner rather than later after the former Manchester United and Queens Park Rangers maestro struggled to fit in with Rome giants Lazio, whom he joined last year.

The 23-year-old is priced at 5/1 (6.00) to link up with Villa at Sky Bet, and with Premier League options likely to be slim - if any move back to England’s second tier appears most likely for the midfielder.

One would hardly imagine many players would be keen to leave Leicester City after last season’s Premier League win, but Leonardo Ulloa appears to be eager to leave after a surge in competition at the King Power Stadium.

The Villans are 5/1 (6.00) favourites to land the Argentinian, and at 30 years of age, Ulloa may find the cash-rich club offer the best terms as they seek an immediate return to the Premier League.

Villa’s forward line is already looking quite stacked following the £12 million arrival of Ross McCormack this summer, but Jordan Rhodes may yet be a favourable investment at 8/1 (9.00) with Sky Bet.

There’s sure to be a late surge of business at Villa Park, both in and out of the club, and if Libor Kozak or Jordan Ayew happen to exit, Middlesbrough frontman Rhodes, tried and tested in the Championship, could join.

Something of a long shot on the transfer spectrum, Bolton Wanderers youngster Zach Clough may not be the highest of priorities for Villa this summer as they look for more tried and tested stars.

Nevertheless, the Trotters’ attacking midfield maestro is 16/1 (17.00) at BetVictor to make the move to Villa Park, although it seems unlikely given his first-team chances may be better served at the Macron Stadium.

Mario Balotelli’s Liverpool exit saga finally appears to be coming to its end, but it doesn’t look as though Villa are the ones who have won the race for his signature as 25/1 (26.00) dark horses with Sky Bet.

That’s after Serie A side Palermo were alleged to have edged in on the “race” to land the Italian misfit, and a drop down to England’s second tier always seemed unlikely.

From one unlikely Liverpool target to one that appears almost impossible, Daniel Sturbridge is also listed by Sky Bet as a distant 25/1 (26.00) option to leave Anfield for the heights of Villa Park this summer.

Jurgen Klopp has shown a favouring toward other players, but an Aston Villa demotion will seems all too unrealistic, with a wealth of Premier League sides sure to be vying for the England international first.

Find the latest odds on Villa transfers at Sky Bet 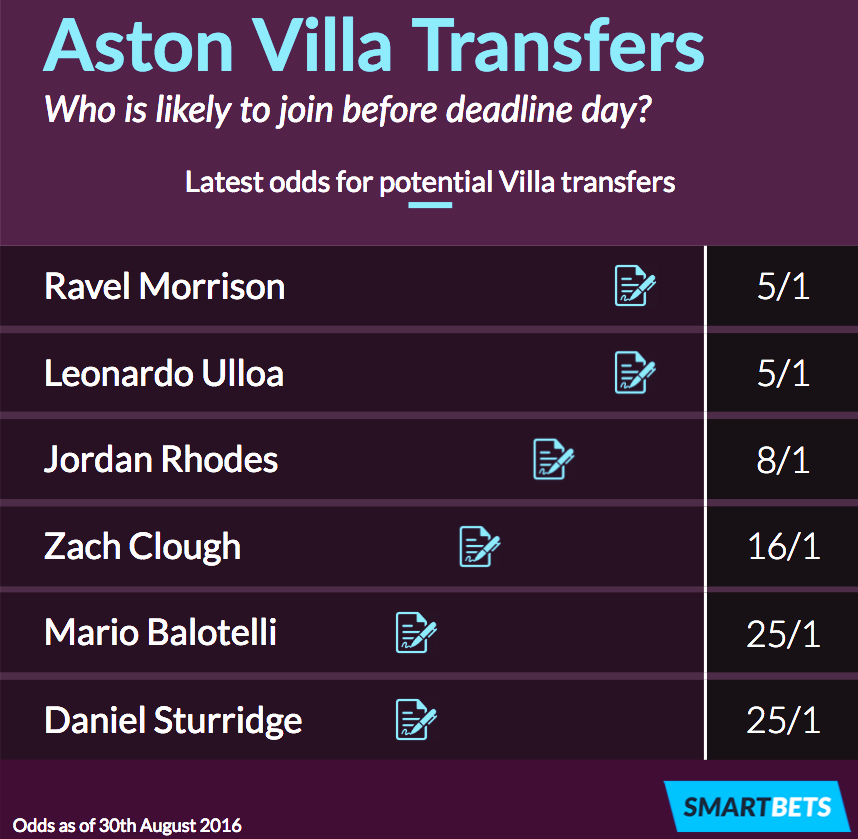