Manchester United manager Jose Mourinho may not be keen on selling much this winter, but a lack of game time could open the departure lounge for Ashley Young, with former employers Watford said to be interested.

The Hornets are 10/1 (11.00) favourites to snatch their former charge’s signature this month with BetVictor, but they aren’t the only Premier League party hopeful of luring Young, and What Are The Odds has a look at who might have a chance of securing his services.

Young left Vicarage Road for Aston Villa in 2007 and currently has a contract with United that runs until the summer of 2018—with the option of an extra year—but after making just four starts this season, the midfielder may be considering his options.

There could be some value in Crystal Palace, too, and despite their billing as 25/1 (26.00) rank outsiders to sign Young, the Sun reported manager Sam Allardyce wants the former Villans star as cover for Wilfried Zaha, who will be away with the Ivory Coast at the Africa Cup of Nations this month.

Everton may also have a chance of tempting Young to Goodison Park given they hold firm transfer links with the Red Devils, although it’s another United outcast, Memphis Depay, with which the Toffees have been more fervently linked. They’re priced at 12/1 (13.00) to sign Young this month, a little in front of 16/1 (17.00) pair West Brom and Swansea City, who could also do with winter reinforcements. 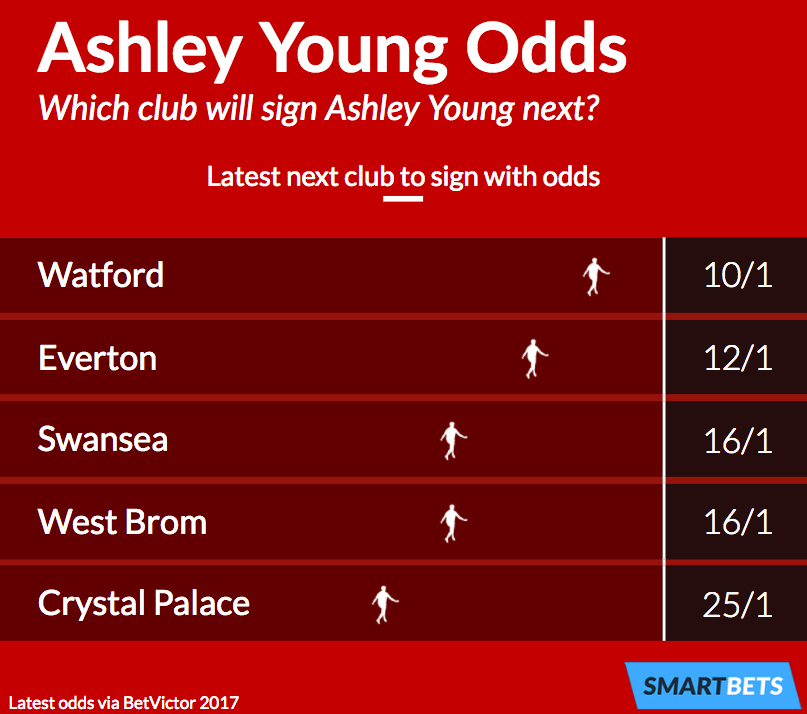 Although Young is linked with a steady line of potential suitors, a January move doesn’t seem likely considering 10 outfits are listed at 25/1 (26.00) to snatch the 31-year-old signature from there, including Palace.

Including the Eagles, five of those hail from the Premier League - Stoke City, Burnley, Hull City and West Ham United - while another five come from the Championship - Newcastle United, Aston Villa, Norwich City, Derby County and Brighton.

That being said, with 18 months remaining on his Old Trafford contract, Young is unlikely to accept the considerable drop in earnings a move to England’s second tier would inevitably bring about.

Probability of Ashley Young's next club