Newcastle United’s run to the Championship summit has come as a result of the team finding its feet under manager Rafa Benitez, but individual star Aleksandar Mitrovic could be heading for the exit.

BetVictor have odds on a host of European and Premier League outfits snapping up the Serbian international in the summer, with the likes of Crystal Palace, PSG, Swansea, West Ham and Napoli leading the way to sign the Magpies brute.

Mitrovic may be allowed to leave St. James’ Park for the right sum, considering Dwight Gayle has firmly established himself in the spotlight as starting frontman.

Crystal Palace were one of the frontrunners to sign the Serbian back in the winter transfer window but a move never materialised, likely due to price and the precarious situation that the Eagles have found themselves in this season. However, a couple of decent results has lifted Sam Allardyce’s side out of the relegation places, and if they do go on to survive BetVictor are backing them at 6/1 (7.00) to be the next club of choice for Mitrovic.

Paris Saint-Germain are a surprising team also at 6/1 (7.00) but with a proven track record of scoring and the Parisians in need of added quality it wouldn’t be such a shock to see him head over to the Champions League hopefuls this summer instead.

Another club on an upward trajectory are Swansea City who are doing all they can to maintain their top flight status under boss Paul Clement. They were favourites prior to Christmas to sign him and it may once again be a ‘goer’ in the summer with Mitrovic priced at 8/1 (9.00) to make the journey south to the Liberty Stadium on the Welsh coast.

West Bromwich Albion and West Ham United will both be on the lookout for new strikers when the transfer window re-opens and a player of Mitrovic’s calibre and likely price tag would be an attractive option for either club, however temperament has been an issue in the past and the likes of West Brom boss Tony Pulis may be put off by the player’s reputation. You can get 8/1 (9.00) on either of these Premier League sides snapping him up in the summer. 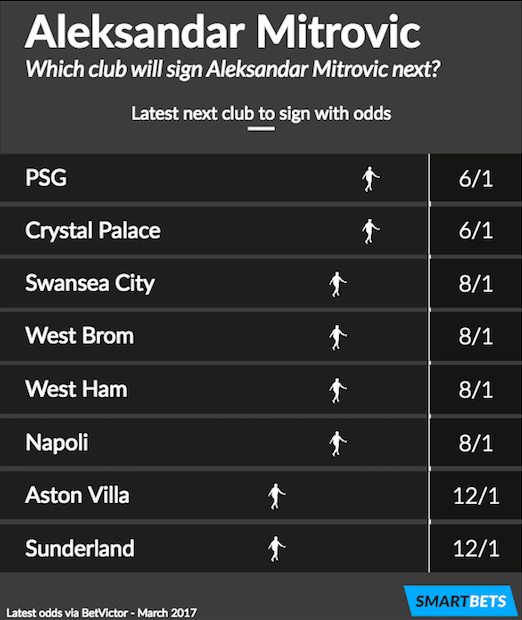 Aston Villa and Sunderland are even more distant punts at 12/1 (13.0) and it looks as if both sides will be playing in the Championship next season, and a sideways move to stay in England’s second tier may not be the move that Aleksandar Mitrovic will want to make at this stage of his career.

Probability of Aleksandar Mitrovic's next club