The race is on in England’s lower leagues as a bevy of clubs jostle for the signature of free agent Adebayo Akinfenwa, who recently departed AFC Wimbledon after helping guide the club to League One. After scoring in the League Two play-off final, the 34-year-old journeyman urged managers far and wide to “hit me up on WhatsApp,” and Sky Bet offers markets on where he’ll end up this summer. 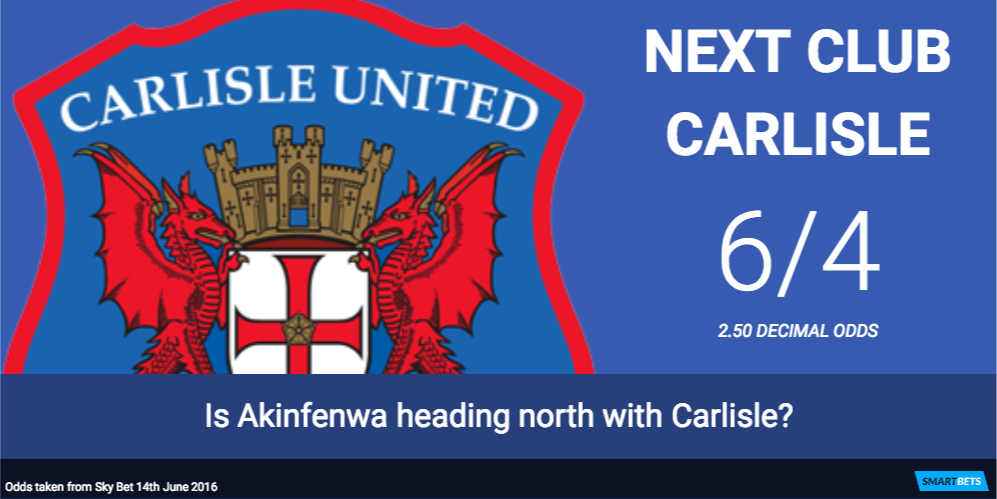 As things stand, Carlisle United are the outright favourites to bring the bulldozer back to League Two, and they’re currently priced at 6/4 (2.50) to be Akinfenwa’s 13th professional outfit. The 2015-16 campaign saw Akinfenwa used in and out of Wimbledon’s XI, starting in 20 of his 38 league appearances and grabbing five goals for his troubles. It was also the first campaign since 2007-08 in which the forward has failed to score goals in the double digits. That said, Carlisle boss Keith Curle is seemingly confident the player can compete in England’s third tier, while 6/1 Cambridge United (7.00), 7/1 Yeovil Town (8.00) and 8/1 Portsmouth (9.00) are also in the running. 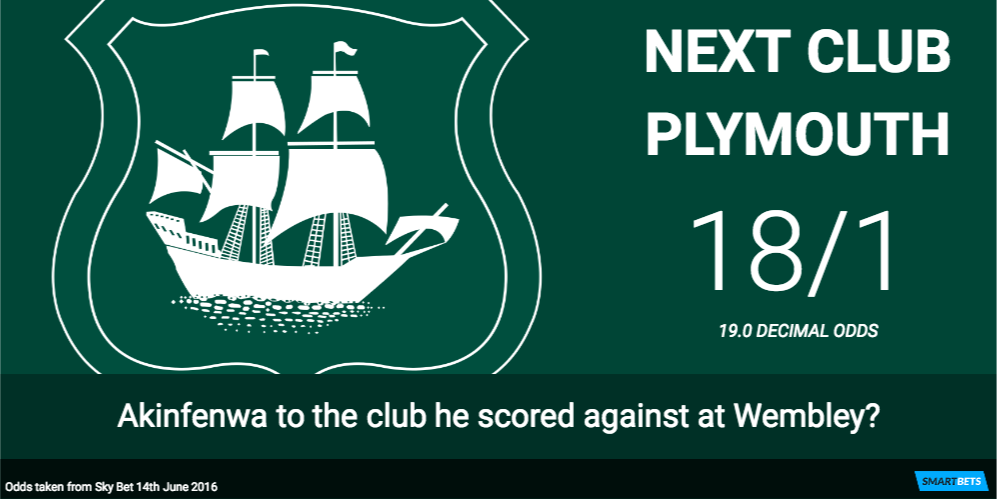 A particularly intriguing option could be 18/1 (19.0) Plymouth Argyle, the very team against whom Akinfenwa converted a penalty at Wembley to complete Wimbledon’s 2-0 play-off win in May and move them into League One. Manager Derek Adams may have use of the attacker, too, after Deane Smalley and Callum Hall were released by the Pilgrims this summer, but the fans at Home Park may have trouble accepting the man who condemned them to another season in England’s fourth tier. It seems unlikely Akinfenwa will move up a division considering his age. However, he’s listed at 20/1 (21.00) to return Priestfield Stadium for a third stint with Gillingham, while Wimbledon are an 8/1 (9.00) dark horse to perform a swift U-turn and re-sign the player not long after his release.

Of all the options, though, a move to MK Dons could be most controversial following their relegation from the Championship, now set to face local derby rivals Wimbledon in League One. Akinfenwa scored 10 goals for the Gills in 2013-14, his last season in the third flight, and he’s a wide bet at 33/1 (34.00) to join MK Dons fresh from his Wimbledon departure.